Here is Your Guide to Behind the Scenes at SNB #2 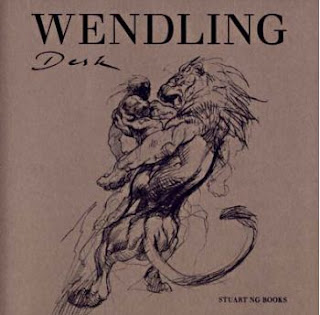 ....and her award-winning art for the Bande Dessinee (or BD) series "Les Lumieres des Amalou" (written by Christophe Gibelin). 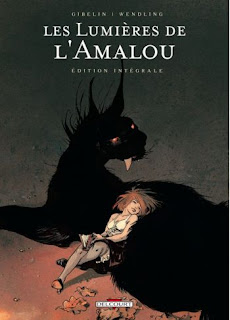 Inspired to attend the 2005 festival for the chance to see a career retrospective of her work, and perhaps meet the artist, Stuart embarked on his first-ever trip to France. In fact, it was the first time he had ever traveled outside of the US. Stuart does not speak or read French. Fortunately for all of us, Claire and her charming husband and colleague Christian speak fluent  English.
Even from those first meetings in the city cafes, Claire and Stuart spoke a common language of appreciation: for Claire's unique skills; and for Stuart's ability to bring her visionary talent to an ever-expanding US and worldwide community of peers and fans.
In the years that followed, Stuart's annual trips to Angouleme for the festival also included a visit with Claire and Christian... bringing them news and appreciation from her US fans ... and always talk of a hopeful visit by them to the US.
WENDLING IN CA - 2015
In 2015, on the 10th anniversary of the Claire Wendling-Stuart Ng connection, Claire was able to accept two long-offered invitations that Stuart had conveyed to her from mutual friends. Claire appeared as a special guest at the  Big Wow comics convention in early April. She accepted an honorary doctorate and speaking engagements at the Academy of Art Universtiy in San Francisco in April and May. Photo below shows Claire and Stuart at Claire's table at Big Wow. 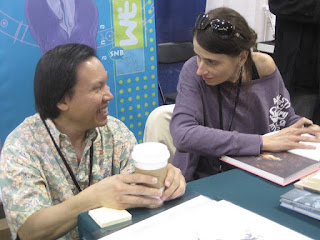 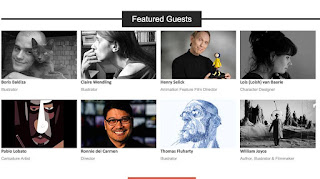 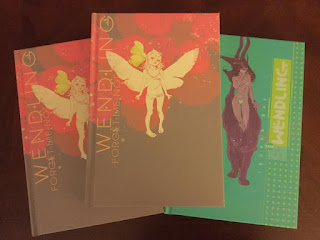 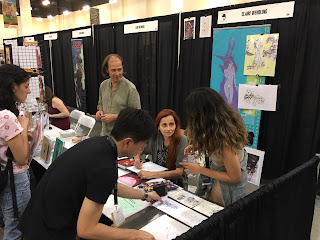 She also had a signing at the SNB store in Torrance.
http://stuartngbooks.blogspot.com/2019/09/wendling-at-snb-store-sat-921-and-sat.html 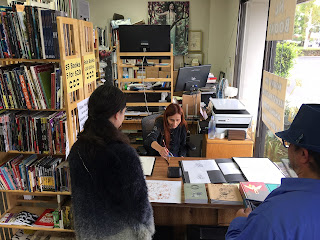 LIGHTBOX EXPO -2020
The online version of Lightbox Expo exceeded expectations with its virtual Artist Alley and array of panels and programs that were recorded and available to re-watch. Here's first of 3 posts on the blog:
http://stuartngbooks.blogspot.com/2020/09/lightbox-expo-2020-friday-online.html 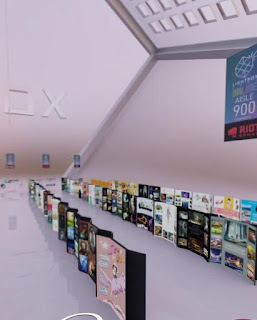 Views of the virtual artists alley... 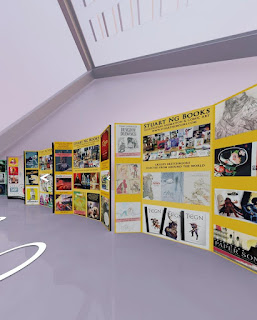 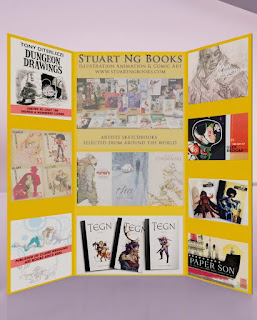 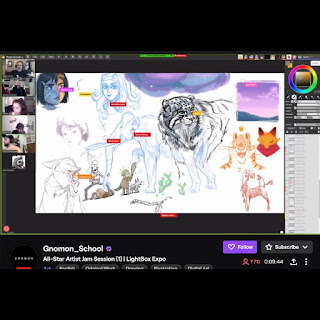 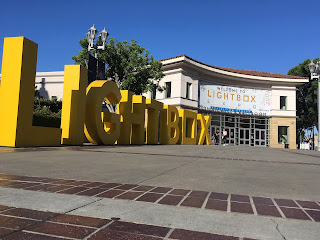 Lightbox Expo also hosts the annual Concept Art Awards. I was very grateful and proud when this community of elite industry professionals recognized Stuart with an important honor.
http://stuartngbooks.blogspot.com/2019/09/lightboxexpo2019-concept-art-awards-5.html 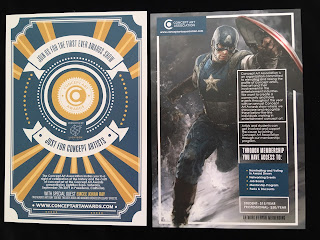 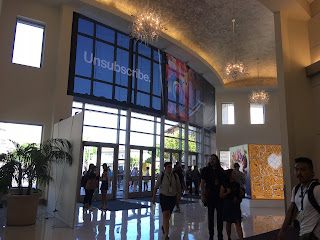 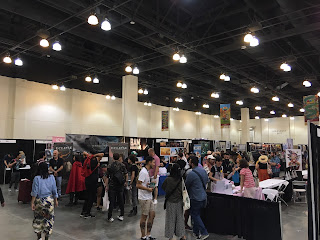 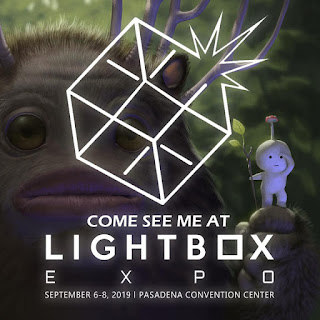 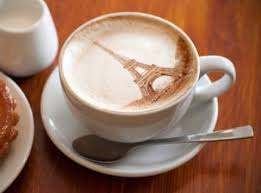 Each year, Stuart recharges with travel to France to attend the largest Comics festival in Europe. It's held in the city of Angouleme, about 2 hours from Paris. During this trip, we get to reconnect with artist pals and colleagues.. and I often get to document my side trips to museums and other art reference adventures. While I used to attend annually, I have taken an indefinite sabbatical from intercontinental travel. You can find France related posts in the February posts of most years on the blog: http://stuartngbooks.blogspot.com/2017/02/paris-2017-sites-and-recommendations_20.html
SNB at SAN DIEGO COMIC CON (SDCC)
Yes, Stuart Ng Books exhibited at Comic Con 2018 and 2019. However, I did not attend these years so there are no posts here on the blog.
5 POSTS ON BLOG FOR COMIC CON 2017
Views of the Exhibit Hall and around the convention... including links for the Blade Runner Experience interactive attraction.http://stuartngbooks.blogspot.com/2017/07/comic-con-2017-1-of-5-stuart-ng-books.html 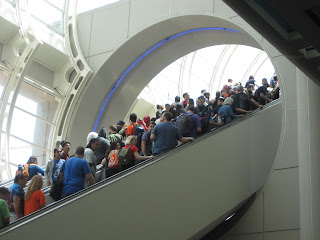 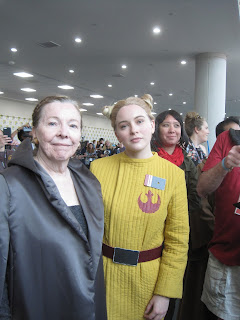 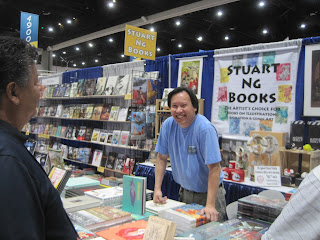 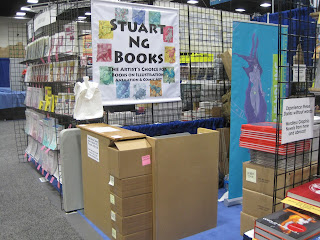 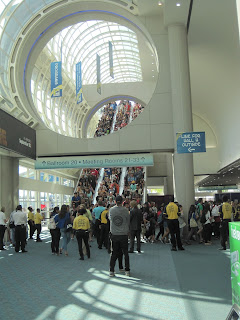 Six posts .. highlighting SNB booth.. Indie Artist Exhibitors....Pavilions, Toys and the Price of Popularity.. link for podcast on Exhibitor Tips for Artists.... Revisit the show starting with  #1 of 6 http://stuartngbooks.blogspot.com/2016/07/comic-con-2016-snb-booth.html
COMIC CON 2015
Comic Con 2015 Seven Posts in all on topics from SNB Booth to Cosplay .. to Marty Mouse Tour..to SDCC survival guide.. plus lots of links for commentary and photo albums. Start here for topic titles and links: http://stuartngbooks.blogspot.com/2015/07/comic-con-2015-seven-posts-hundreds-of.html

CTNX
From the first CTN Animation Expo in 2009, Stuart Ng Books has been an annual exhibitor at this event. We missed out on 2019 because booths were sold out when Stuart went to sign up. Instead we enjoyed a more relaxed weekend just shopping and visiting with colleagues.
http://stuartngbooks.blogspot.com/2019/11/ctnx-2019.html

DESIGNERCON
Stuart rarely gets to exhibit at or attend this con, as it's on the same weekend at CNTX. However, many of our artist friends find exhibiting at DesignerCon is a good fit for them. I have posted on the blog about it on the times I've been able to attend.
http://stuartngbooks.blogspot.com/2019/11/designercon-2019.html
As an experiment, SNB was at both CTNX and DesignerCon in 2018 -- but we were stretched thin as you can see in this brief blog post
http://stuartngbooks.blogspot.com/2018/11/ctnx-and-designercon-2018-photos-added_24.html
This 2014 DesignerCon post shows it at the Pasadena Convention Center
http://stuartngbooks.blogspot.com/2014/11/designercon-2014-post-in-progress.html
EMERALD CITY COMIC CON
NEW YORK COMIC CON
Stuart attends these cons, but I haven't been to them, so no posts here yet.
SNB KNOWN FOR BOOKS SIGNED BY ARTISTS
Exhibiting at conventions and long-time personal relationships with artists are just some of the ways Stuart is able to provide signed copies of books for his patrons. He is also called on by studios and art schools to provide book sales for guest artist lectures. Signed copies allow SNB to carry some in-print titles from major publishers. Indie bookstores can't compete with the massive price-cuts on current books offered as loss-leaders by online giants. They are selling books at a loss. They don't care about books. They want your consumer dollars for all sorts of other purchases and services. Stuart wants to offer in-print books as a convenience for his patrons. So he adds the priceless benefit of the book having been in the hands of the artist and/or author. This way Stuart can offer the book at a reasonable price that covers his inventory expenses etc and helps deter outsiders from buying signed books from him just to flip them for higher prices online. Most of the signed copies Stuart stocks sell out right away. This is because they are going right into the collections of fans who treasure them. Win-win.

Signings at a convention... 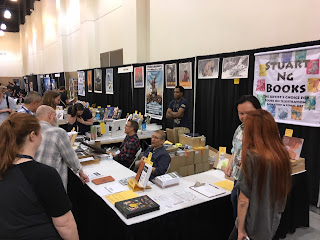 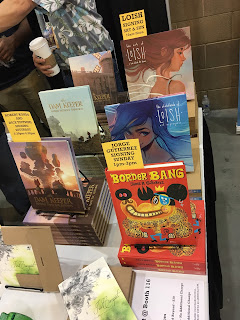 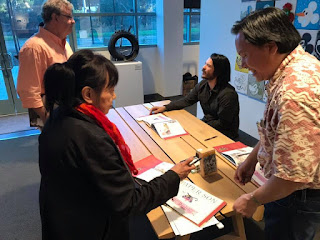 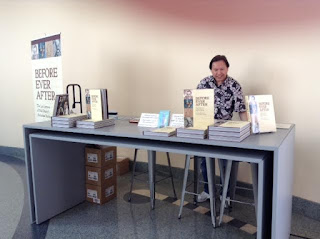 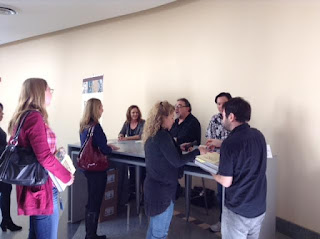