The Library of Congress announced the addition of a multi-million dollar donation ... the collection of Stephen A. Geppi, owner and CEO of Diamond Comic Distributors. (photo of Geppi below by Shawn Miller) 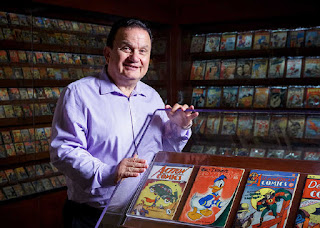 This collection is described here from the Library of Congress press release.


...more than 3,000 items from his phenomenal and vast personal collection of comic books and popular art, including the original storyboards that document the creation of Mickey Mouse.  This multimillion-dollar gift includes comic books, original art, photos, posters, newspapers, buttons, pins, badges and related materials, and select items will be on display beginning this summer.
The Stephen A. Geppi Collection of Comics and Graphic Arts has been on public display in Baltimore, Maryland, for the past decade and is a remarkable and comprehensive assemblage of popular art.  It includes a wide range of rare comics and represents the best of the Golden (1938-1956), Silver (1956-1970) and Bronze (1970-1985) ages of comic books. The mint-condition collection is also noted for its racially and socially diverse content as well as the distinctive creative styles of each era.
The collection also includes motion picture posters and objects showcasing how music, comic book characters, cultural icons and politicians were popularized in the consumer marketplace.  Among these are Beatles memorabilia, a collection of flicker rings popularizing comic book characters and political figures such as Martin Luther King Jr., Richard Outcault’s The Yellow Kid printing blocks and the No. 2 Brownie camera model F from Eastman Kodak Company.
One signature item in the collection represents the birth of one of animation’s most iconic characters. Six rare storyboards detail the story layout and action for Walt Disney’s 1928 animated film, “Plane Crazy.”  It was the first Mickey Mouse cartoon produced, but the third to be released, after sound was added, in 1929. “Steamboat Willie” was the first Mickey Mouse cartoon to be theatrically released, on Nov. 18, 1928, which marks its 90th anniversary this year. 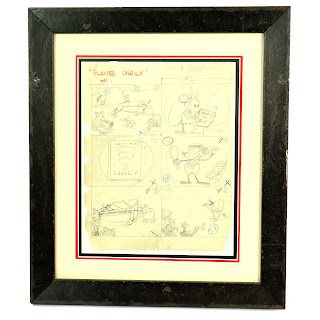 The collection had previously been on display in Baltimore for 12 years as the Steve Geppi Entertainment Museum:

Enjoy this video peek into the Disney archives ... and see another example of art and science intersecting in the effort to conserve animation cels...

When they were unveiled back in February... these artworks sparked controversy and inspired dialogue. Since then, they have brought record crowds to the National Portrait Gallery. 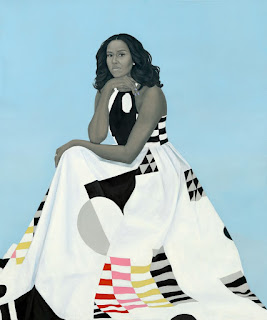 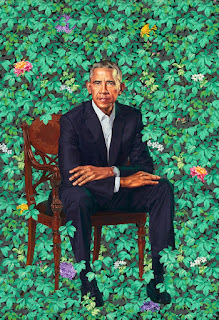 Read more about the portraits here: