Terryl Whitlatch was born in Oakland, California, and started drawing at less than three years of age. Blessed with a mother who was, and still is, a talented artist-illustrator, and a father who taught biology, her fascination with animals started early. Countless weekends were spent visiting zoos, aquariums, and museums, and her father was constantly bringing home mounted skeletons, creatures preserved in jars, and living animals as well – chicken hatchlings, bullfrogs, iguanas, and insects.

University, Terryl began a career that has spanned over 25 years. She has worked with many major studios and effects houses as a highly sought after creature and concept designer. Clients include Industrial Light and Magic, Lucas Film Ltd., Pixar, Walt Disney Feature Animation, PDI, Entertainment Arts, LucasArts, Chronicle Books, and various zoos and natural history museums.

Terryl has acted as principal creature designer for Star Wars — the Phantom Menace. She designed most of the alien characters and creatures, from concept to fully realized anatomies and stylizations. Some of the significant characters include Jar-Jar Binx, Sebulba, the pod racers, the undersea monsters of Naboo, and the Naboo Swamp creatures. She also worked closely with George Lucas in the redesign of such pre-existing characters as Jabba the Hutt and the dewbacks.

She also is the creator and illustrator of three books: The Wildlife of Star Wars: A Field Guide, The Katurran Odyssey, and the newly released Animals Real and Imagined. 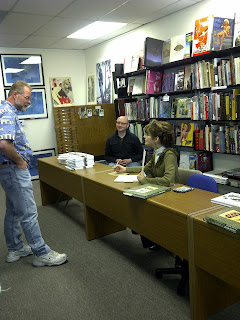 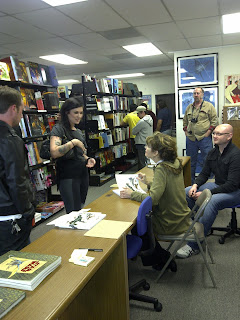 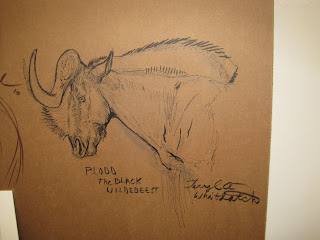 Terryl graciously added the sketch above to our drawing board.... after several hours of signing and sketching in her new book "Animals Real and Imagined" for fans at the showroom, and numerous mail orders. As a bonus, we were also able to have the books signed by Gilbert Banducci, who edited the book. This signing was another lively event with lots of inspiring discussions between Terryl and our patrons who stopped by. Topics included a round of "3 Favorite Animals and Why." Terryl's extensive study of vertebrate zoology is evident in the wide range of work in this book. Images include detailed skeletal and muscle studies of both real and imagined animals. Her work illustrates her philosophy that embracing the science and study of real animals in real environments is the basis for creating fanciful creatures that seem just as "real" as the familiar animals we all recognize. If you missed out on the signing... we still have a few signed copies of the book in stock now. Thanks Terryl and Gil for stopping by and making this event so much fun!
Posted by aw at 7:18 PM No comments:

We were delighted to host another lively "Meet the Artists" gathering on Dec 11th. We welcomed direct from Paris, Fabien M., the artist of the bande dessinee comedy adventure "Tikitis", and Pasadena's own William Stout, signing his new book, "Inspirations." 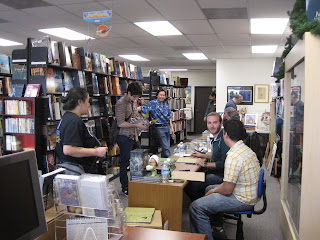 A highlight of the event was when Bill and Fabien both looked through a Jack Kirby portfolio from our "rare books" shelf....and Bill, who knew Kirby, shared some insight into Kirby's work and life.... 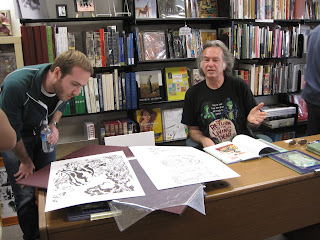 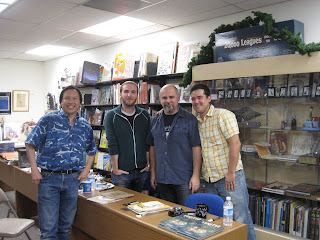 As usual, the artists were busy drawing sketches for the many mail orders for the event, as well as chatting with the patrons who attended that day. 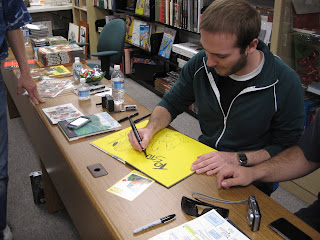 Don't miss out on the next event! They are announced via Stuart's email... and on our website.
Posted by aw at 10:42 AM No comments: