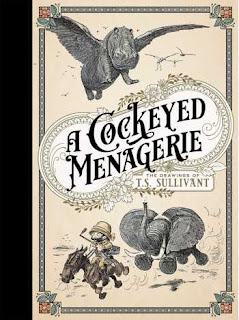 This book is 2" thick! It's a substantial reference tome. The link on the SNB website shows a number of sample images from the book. Here are a few: 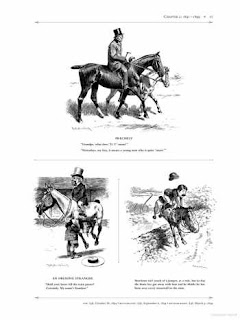 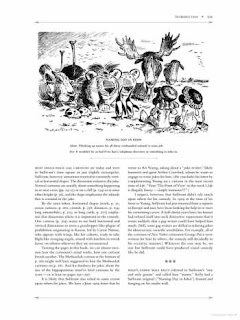 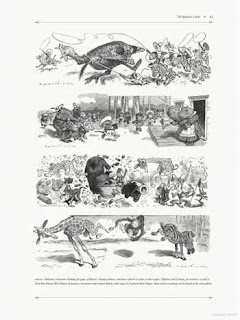 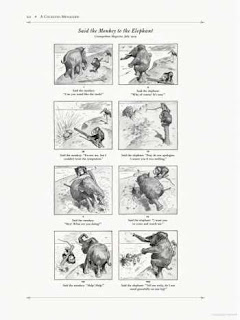 T.S. Sullivant (1854-1926) is an iconic artist who modern masters look back to. Fair warning -- the racial caricatures in some illustrations are cringeworthy today. But Sullivant's animals are timeless.

A reference book like this of Sullivant work has been on the wish-list of  illustration art professionals and fans for years. That demand was confirmed when this 2021 release sold out quickly at the publishers.

Sullivant's command of anatomy to render character and comedy makes his art valuable for artists at all levels to study. Artists and collectors can also gain perspective from viewing his art in the context of his times.

Some insights into why artists value studying Sullivant's anatomy skills are in this 2013 post from David Apatoff's blog "Illustration Art" https://illustrationart.blogspot.com/2013/04/ts-sullivant.html?fbclid=

Bio of Sullivant on Wikipedia: https://en.wikipedia.org/wiki/T._S._Sullivant

You can sign up for Stuart's weekly newsletter and get first look at his picks of new arrivals etc. at this link from the SNB website: https://stuartngbooks.com/join-our-mailing-list.html

I'm not an expert on Facebook... or this case... but I got caught up in it earlier this week. I tried to share a news story from a mainstream Australian newspaper and got an autogenerated message that the post could not be shared at this time.

(photo below by James D. Morgan/Getty Images.. from Scientific American article linked further down in this post) 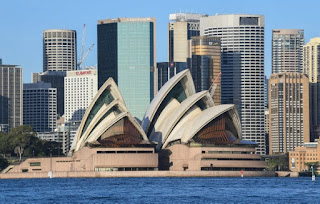 When my benign news post from a legit source got blocked, I got curious. I started SIFTing..

Not famliar with SIFT??? Check out this post: http://stuartngbooks.blogspot.com/2020/08/sift-system-and-sites-to-fight-mis.html

What I discovered is an interesting case study in content creators pushing back against lack of credit and compensation for all their work that gets "likes and shares."

So who is losing out??

The content creators. Indie artists. Journalists. Photographers. Facebook was never designed to credit these sources – much less compensate them for their work. For many users, a Facebook page is purely personal with family pics and favorite meals celebrated. But for indie artists, their social media platforms are vital to connecting with their followers. Facebook, Instagram etc benefit from these pages full of artWORK... but treat even the most shared and valuable content as the platforms' alone to profit from.

As a result, a robust online culture has developed where users enjoy “free” online art, images and stories, while Facebook doesn’t have to pay for the very content their platform thrives on.

Some newspapers and magazines started adding paywalls – which is reasonable -- but users complain about these. Only because the business model Facebook designed has conditioned users to expect every thing they want to “like and share” should also be free.

This creates tension between the users and the content creators. But where is Facebook is all this??? Just happily collecting our data and their massive profits.

Now there is some pushback coming from the journalism side.

Earlier this week, you couldn’t share a news story that originated from an Australian journalism site, because Facebook was upset with new laws the government there is considering.

Right now, Facebook has resumed allowing Australian news stories to be “liked and shared.” There’s a cooling off phase that was negotiated so both sides could re-assess and resume talks. This will be an interesting case study to follow.

If news stories can get credit and compensation from Facebook --- maybe some day indie artists will get that too??? It's a big ask. But artWORK deserves it. And educated followers can start to push for it.

Here are links for articles on this case from the New York Times and Scientific American magazine, as well as an Op-Ed from the Los Angleles Times.

Excerpt: "Facebook said on Monday that it would restore the sharing and viewing of news links in Australia after gaining more time to negotiate over a proposed law that would require it to pay for news content that appeared on its site.

The social network had blocked news links in Australia last week as the new law neared passage. The legislation includes a code of conduct that would allow media companies to bargain individually or collectively with digital platforms over the value of their news content.

Facebook had vigorously objected to the code, which would curb its power and drive up its spending for content, as well as set a precedent for other governments to follow. The company had argued that news would not be worth the hassle in Australia if the bill became law.

But on Monday, Facebook returned to the negotiating table after the Australian government granted a few minor concessions. Under several amendments to the code, Facebook would get more time to cut deals with publishers so it would not be immediately forced into making payments defined by media companies. The amendments also suggested that if digital platforms voluntarily contributed enough money to the Australian news industry, the companies could avoid the code entirely, at least for now."

"Facebook Would Rather Ban News in Australia Than Pay for it" by Vanessa Freije. 2.21.21

Excerpt: "Facebook has barred Australians from finding or sharing news on its platform, in response to an Australian government proposal to require social media networks to pay journalism organizations for their content. The move is already reducing online readership of Australian news sites.

Similar to what happened when Facebook suspended Donald Trump’s account in January, the fight with Australia is again raising debate around social media networks’ enormous control over people’s access to information. Australia’s prime minister, Scott Morrison, says his country “will not be intimidated” by an American tech company.

My research in the history of international media politics has shown that a handful of rich countries have long exerted undue influence over how the rest of the world gets its news."

Editorial: "Australia is Trying to Save Local Journalism from Facebook. Will the US be next?"

Excerpt: "That’s why a growing number of democracies are looking for ways to shore up local news outlets, which have long played a key role in scrutinizing elected officials and their policies, uncovering waste and fraud, and holding local governments accountable to the public. In particular, they’ve looked to tap the staggering online advertising fortunes amassed by Google and Facebook, two global powerhouses that have become major outlets of news online — much of it reported and written by newspapers. Those companies are in lawmakers’ sights also because of the control they exert over online advertising technology and their ability to collect data about internet users, including the ones on newspapers’ own sites.

The latest government to take on this issue is Australia’s, which is poised to require Google and Facebook to negotiate with news companies — individually or collectively — for the right to publish links to or snippets of their stories. The proposal echoes similar measures that have been enacted in Europe and are being floated in the United States and Canada."

Excerpt: "Facebook said Tuesday that it would lift its ban on Australians sharing news after it struck a deal with the government on a proposal to make digital giants pay for journalism.

Australian Treasurer Josh Frydenberg and Facebook confirmed that they had agreed on amendments to legislation that would require the social network and Google to pay for Australian news featured on their sites.

Facebook’s cooperation is a major victory for Australia’s efforts to make the two internet gateways pay for the journalism they use.

….Frydenberg described the agreed-on amendments as “clarifications” of the government’s intent. He described his negotiations with Facebook Chief Executive Mark Zuckerberg as “difficult.”

“There is no doubt that Australia has been a proxy battle for the world,” Frydenberg said, referring to the dispute over the proposed News Media Bargaining Code legislation. “Facebook and Google have not hidden the fact that they know that the eyes of the world are on Australia, and that is why they have sought to get a code here that is workable.”

This week, Microsoft and four European publishing groups announced they would work together to push for Australian-style rules for news payments from tech platforms.

“The latest twist proves that regulation works,” said Angela Mills Wade, executive director of the European Publishers Council. “Regulators from around the world will be reassured that they can continue to take inspiration from the Australian government’s determination to withstand unacceptable threats from powerful commercial gatekeepers.”

The proposed media code in Australia would lessen Facebook and Google’s enormous bargaining power in their negotiations with Australian news providers by establishing an arbitration panel. That would prevent the digital giants from using their hugely advantageous negotiating positions to make take-it-or-leave-it payment offers to news businesses for their journalism. In case of disputes, the arbitration panel would make a binding decision on a winning offer.

The CASE Act became law in December 2020. (image below from the Graphic Artists Guild) 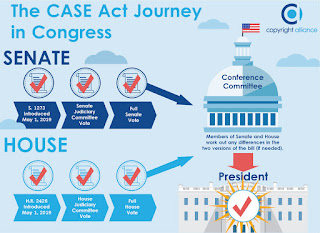 The CASE Act is a small claims court option for artists to fight art theft and copyright infringement. CASE is the acronym for Copyright Alternative in Small-Claims. The law is partially based on an existing small claims court option in the UK that artists there have been happy with. The CASE Act bill was backed by a number of indie artist professional organizations such as the Graphic Artists Guild (GAG) https://graphicartistsguild.org/ The Copyright Alliance https://copyrightalliance.org/ and the Professional Photographers of America (PPA). https://www.ppa.com/

It was a bill I'd been following for some time.

You can see some history of the CASE ACT in this post here on the blog: http://stuartngbooks.blogspot.com/2019/10/case-act-yes-vote-in-house-now-on-to.html

As with all new laws, it will take some time... and some cases... for the law to get the kinks worked out.

What should you be doing right now to protect your artWORK??

You really don't have a legal case for art theft without this step. Registering your copyrights assures you the greatest legal protections.

Here are some links to recent articles/website sources about the new CASE Act law.

12.28.20 "What's Next for CASE Act" https://graphicartistsguild.org/case-act-update-whats-next-for-a-small-claims-tribunal/?fbclid=

2.3.21 "How to Navigate the new Copyright Small Claims Court" https://www.kirkland.com/publications/article/2021/02/how-to-navigate-the-new-copyright-small-claims-cou

Oct 2019 post here on the blog reviews steps in progress from bill to law.