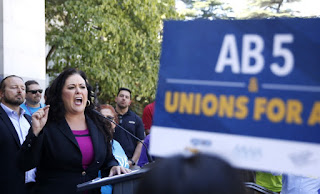 Assemblywoman Lorena Gonzalez speaks at a July rally in Sacramento after her measure to limit when companies can label workers as independent contractors was approved by a Senate committee.
(Rich Pedroncelli / AP)
Quote: "Freelance writers and photographers are not the only critics of the law....Gig-economy companies such as Uber, Lyft and DoorDash launched a campaign against the legislation, arguing that treating workers as employees would hobble them in California, one of their biggest U.S. markets, and set a precedent for other states to enact similar legislation. The companies have said they will spend tens of millions of dollars on a ballot measure opposing the law if they are not able to carve out alternative rules for drivers."
As discussed previously here on the blog, laws are debated, written and passed, often with good intentions that fall short.

The next step comes when laws are lived in real-life. Real life is where the intention of the law gets clarified through cases brought to court.