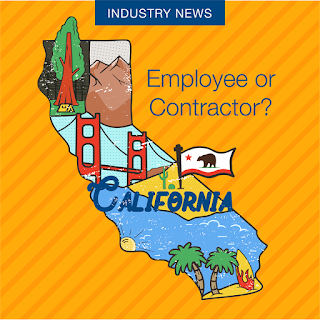 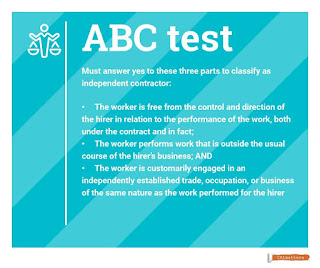 AB 5 went into effect Jan 1, 2020. It has undergone several revisions. It's still a mess and there is talk of repealing it -- but given everything else going on in the world, that's on the back burner.

Here's a commentary from a CA law firm (https://www.nixonpeabody.com/en)

Get ready for 2021! A roundup of new California

By Hillary Baca and Seth Neulight

"Californians have faced significant challenges in 2020, from the COVID-19 pandemic and resulting
economic shutdown, to raging wildfires and social unrest. Still the legislature produced a
substantial number of new employment laws that will impact employers in the Golden State. Here
is a roundup of these laws, which, unless indicated otherwise, will take effect on January 1, 2021.
AB 2257 — Amendment of AB 5 Independent Contractor Classification Law
AB 2257, which took effect on September 4, 2020, amends the AB 5 law governing classification of
independent contractors. AB 5 codified the so-called “ABC” test for determining whether a worker
is an independent contractor. Under that test, a worker is presumed to be an employee unless the
hiring entity establishes three factors: (A) “[t]he worker is free from the control and direction of
the hiring entity in connection with the performance of the work, both under the contract … and
in fact”; (B) “[t[he worker performs work that is outside the usual course of the hiring entity’s
business”; and (C) “[t]he worker is customarily engaged in an independently established trade,
occupation, or business of the same nature” as the work performed for the hiring entity. AB 5
exempted many occupations and service providers from the ABC test, and made them subject to
the more flexible, multi-factor Borello test instead.
AB 2257 retains the ABC test, but adds to the long list of occupations exempt from it, including but
not limited to: performance artists, songwriters, and others involved in “creating, marketing,
promoting, or distributing sound recordings or musical compositions”; other creative workers who
provide services under contract, i.e., “freelance writer, translator, editor, copy editor, illustrator[,] or
newspaper cartoonist”; insurance underwriting inspectors; a “manufactured housing salesperson”;
licensed landscape architects; real estate appraisers; and home inspectors, among others.
AB 2257 also recasts and clarifies exemptions from the ABC test that existed in AB 5 for businessto-business relationships, referral agencies, and professional services"

Also links for the current list of excemptions from the law

and the law as it stands now.

Previous posts on AB5 on the blog: 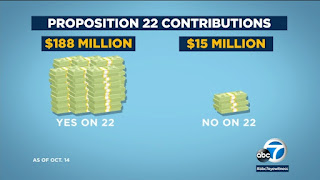 Prop 22 was richly funded by companies like Uber, Lyft, Door Dash etc. Prop 22 passed, but I really wonder if folks who voted "yes" really understand what they were supporting. With the succesful passing of Prop 22, the companies that backed it are looking to unleash it in other states.

Here's a recent LA Times article about the fall out that happens with Prop 22 in effect -- fulltime jobs w/ better pay and better benefits lost.

"Those who warned that California’s anti-labor Proposition 22 would hasten the destruction of good jobs and the rise of gig work have a new data point to cite, courtesy of the Albertsons grocery empire.

As of the end of February, hundreds of home delivery drivers for Vons, Pavilions and other stores owned by the Boise, Idaho, chain will no longer be employed by Albertsons.

Their work will be outsourced to the gig delivery company DoorDash, which has made a nationwide deal to take over the service.

Albertsons says the transition is national in scope and has nothing to do with California’s Proposition 22.

But make no mistake. Proposition 22, which passed in November with a $206-million war chest from ride-hailing and delivery companies, made this change almost inevitable in California.

With contributions totaling $52.1 million, DoorDash was the second-largest backer of the Proposition 22 campaign, just behind Uber, which put up $59.2 million.

Proposition 22 makes it virtually impossible for regulators to scrutinize wages and hours and other working conditions at the gig companies. Without a change in federal law, their workers will be barred from organizing a union. They’re not entitled to unemployment insurance or workers’ compensation.

“This is what we predicted would happen with Proposition 22,” says Steve Smith, spokesman for the California Labor Federation. “We could see it coming 100 miles away.”

New lawsuit to stop Prop 22 has just been filed.

Excerpt from LA Times article above:

"Scott A. Kronland, an attorney representing the union and drivers, argues that Proposition 22 infringes on the California Constitution — which it does not have the authority to do, since it was introduced through the ballot measure process as a statutory initiative, rather than as a constitutional amendment.

“They overreached,” said Kronland, who works for the San Francisco law firm Altshuler Berzon. “The language of the California Constitution is very clear” on the powers allocated to elected officials, he said.

Proposition 22 was bankrolled by Uber, Lyft and other gig economy companies seeking a carve-out from a sweeping state labor law that required the companies to classify their large numbers of workers as employees instead of independent contractors. It became the most expensive ballot measure in U.S. history, and cruised to a victory with 58% of the vote.

The bold move allowed some of the world’s most recognizable gig platforms to dodge an overhaul of their business models in California, a huge market, and continue to rely on relatively cheap workers without offering the slate of benefits and protections afforded to employees.

Labor law experts say other states are looking at the California gig-work model. And although Proposition 22 mandated some new benefits for gig workers in California, the added cost to the companies may be creating a race among them to keep their user prices competitive in a way that workers worry might jeopardize their earnings. The pandemic has put a fresh spotlight on the law, with grocery shoppers and meal-delivery drivers recognized as front-line essential workers…....

....The California Supreme Court will need to decide whether to hear the case. If it decides not to hear it, the case would have to be refiled in a lower court and work its way up. There is no deadline for the Supreme Court to act on the petition. Attorneys arguing the case said at Tuesday’s news conference they expected to hear within a few weeks.”

"One of the nation’s largest grocery chains, Albertsons, announced this month that it would replace many of its staff delivery drivers with independent contractors working for the delivery service DoorDash. Those contractors will not receive important labor protections that have been provided to the full-time employees they will be replacing.

For years, companies and legislators have debated whether so-called gig workers like those who drive cars for Uber or deliver groceries for DoorDash should be entitled to benefits like minimum wage and unemployment insurance. But in the wake of a California ballot proposition passed in November and a rule just released by the Trump administration, it appears that the erosion of labor protections is advancing aggressively….

….App workers need the same benefits afforded to traditional workers, including payment for time between assignments, unemployment benefits and the right to organize. The pandemic, which greatly worsened conditions for delivery workers and “shoppers” (the people assembling grocery orders), has exposed just how vital basic protections are for vulnerable workers.

In ongoing research with colleagues at Northeastern University, one of us, Dr. Schor, analyzed a delivery platform that converted its California workers to employees before the passage of the 2019 law. Both top and middle management said they felt positively about the switch, citing improved performances and increased productivity that partly offset the costs of employment protections.

In ethnographic research on Uber and Lyft ride-hail drivers, Dr. Dubal found that, contrary to the companies’ promises of freedom and flexibility, longtime drivers feel trapped in grueling work schedules and controlled by their algorithmic bosses. Notably, these findings undermine Uber and Lyft’s arguments against employment status.

In a bad omen for workers outside California, Dara Khosrowshahi, the chief executive of Uber, has vowed to support efforts similar to Proposition 22 elsewhere. Lyft, a competitor, is behind political action committees that will support candidates who will protect its business model. Shawn Carolan, a venture capitalist whose firm has invested in Uber, has written that the Proposition 22 model should be extended to other industries, such as education, health care and computer programming — which would increase the number of Americans who toil without a safety net or predictable earnings.

In some sense, gig-economy companies have been moving in parallel with Washington. The Trump Labor Department this month released a rule, set to go into effect in March, that will make it easier for companies to designate their workers as independent contractors.

But the incoming Biden administration can undo the rule. And working with Congress, it can move to dignify app-deployed work by calling it what it is: employment."

Excerpt: "Assembly Bill 5 codified the ABC Test, which was first introduced in Dynamex Operations West, Inc. v. Superior Court of Los Angeles. These metrics were designed to be more predictable, consistent, and simplistic than the Borello Test. Under the ABC Test, app-based companies would have been required to classify their workers as employees and ultimately forgo the defining features of gig employment. After losing in the courts, these companies turned to voters as a last-ditch effort.

The Yes on Prop 22 coalition, funded by companies such as Uber, Lyft, and DoorDash, poured over $200 million into its campaign to “save app-based jobs and services.” The coalition warned that if the ballot measure did not pass, gig apps would have higher prices and workers would be laid off. Despite passing Proposition 22, Californians are still experiencing these economic woes.

In order to garner more votes, app-based companies promised better compensation, health benefits, and civil rights protections for gig workers, even though such guarantees necessitated more fees and changes. By doing so, gig work began to resemble traditional employment, rather than an alternative work arrangement.

But saying “no” to Proposition 22 would not have yielded better outcomes. Classifying gig workers as employees would have resulted in a greater erosion of choice, flexibility, and autonomy, if not a complete discontinuation of services in the state.

The ballot measure was never intended to fix antiquated employment classifications. It was a direct response to the ABC Test which, rather than sort through the nuance of gig work, hastily classified these workers as employees."