The fates smiled on all of us... and thanks to a terrific effort by so many involved... the US Debut of Sketchtravel exceeded expectations.... 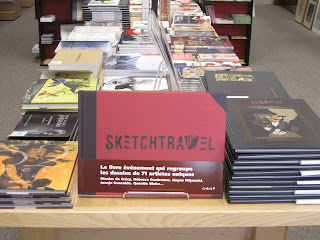 The line-up was outstanding.. and all the artists were great sports! R to L below you can see Lorelay Bove, Eli Harris, Benoit Le Pennec (and that guy in the aloha shirt, Stuart Ng ;) 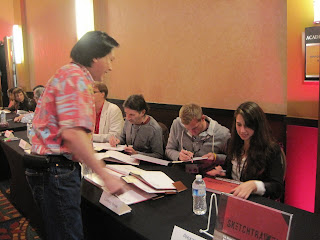 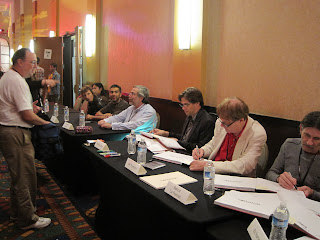 It was quite a crowd on both sides of the table... the signing happened during the last hour the exhibit hall was opened. 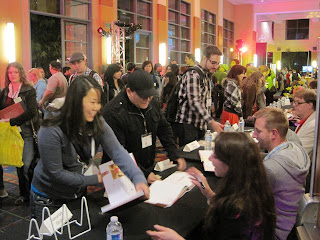 What a night to remember! Everyone was so understanding... especially the attendees who were waiting in line.. OUTSIDE! I was the one handing them chocolates once we finally got everyone inside. In spite of the late start, we got the signing wrapped up after about an hour, for a champagne toast courtesy of CTNX, and time for the artists and attendees to mingle... 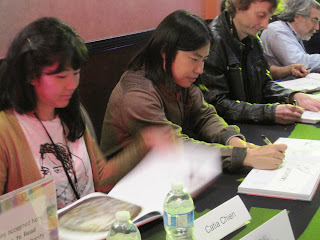 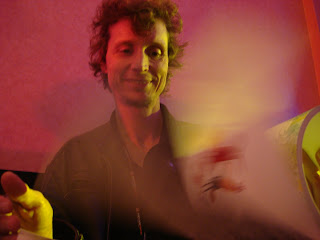 During the signing and party, we're running around like only we can at team SNB. Because the exhibition hall closed at 7PM, the lights dimmed to kick off CNTX @Nite.... which included the signing area, so I only caught these few pictures myself. I managed to have a really fun, too brief chat about our Pres Romanillos Sketchbook with CTNX guest artist Carlos Grangel who stopped by for the Sketchtravel signing and party. Sorry, no picture, but what a nice guy! Stuart and Mary were taking care of the artists and attendees at the signing, and I had to return to our booth, which was still open during the signing... and needed to be shut down after the hall closed for the night. It takes a team... and some of us are behind the scenes :)
Posted by aw at 7:56 PM