Your art on display by another artist --- What would you do?

Another unauthorized use of images case study.... I learned about this online and got artist Angela's permission to share:

At a recent convention, artist Angela Li noticed her original artwork was being exhibited by another artist (we'll call them Artist X). That's right... at the same show.. at a nearby table.. Artist X was selling plagiarized prints. Angela brought this fact to Artist X's attention...

Here's how Angela described the situation (this quote from a social media site)...

"....a fellow exhibitor decided it was a great idea to sell plagiarized work. My artwork was taken, painted on top of, displayed, and posed as theirs. Not only did this person steal, but took no care or concern at all to realize that the artist she stole from and whose artwork she is selling is sitting right in front of her.

When confronted, this artist shamelessly told me she had no idea what I was talking about, denied any wrongdoing, noted no resemblance and told me she painted this years ago (it was posted in June this year). While it was eventually taken down, it is insulting not only to have my own artwork being profited from right in front of me, but also to be lied to my face even when shown a blatant side by side comparison. As professionals, we should maintain artistic integrity and grow as our own artist. Be inspired by the art around you but don't steal and claim as your own."

Here are the photos Angela used to illustrate her objections:

Angela's situation is not rare. And Artist X's reaction is frighteningly common. This entire scenario is typical of the frustration artists have when trying to protect their intellectual property... AND the lack of education and/or etiquette when in comes to posted plagiarized work.. in portfolios.. on websites.. and at convention  tables.

On the social media site where Angela posted about this incident... many peers and fans commented with their reactions ... and suggestions of ways to take action.

We need to bring this problem.. and the solutions.. into a wider audience. Artists, convention organizers and fans need to have a ZERO TOLERANCE policy when it comes to plagiarized works.
For now, there are some good tips on this link (a 2010 online article "What to do if someone steals your design" written by Joshua Johnson) that was suggested to Angela via comment on her social media post:
http://designshack.net/articles/graphics/what-to-do-if-someone-steals-your-design/ 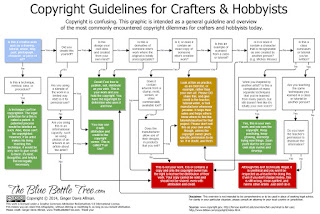 I'll be continuing to update this post on the blog.. and looking for ways to expand the conversation.

Companies that own licences to images/likenesses will shut down booths at shows if vendor is selling items with unauthorized use of licensed images. Companies that own and license images have vast resources to back up their claims.... but all their power still comes down to honoring copyright protections.

How can indie artists and patrons have impact? Respect for copyright needs to be enforced via education, outreach, conversation, and peer pressure.

Don't accept its "just gonna happen" with unauthorized use of images by indie artists ....  change will come with awareness and action...  and that includes on the exhibit hall floor.