He brought physical strength and emotional gravitas to his role as T'Challa, the King of Wakanda and the Black Panther. Not to mention his performances in "42," "Get on Up," "Marshall," and "Da 5 Bloods."

In movies -- action is character. What characters do is often more important than what they say.

With his passing, the world learned he had been fighting cancer for four years. 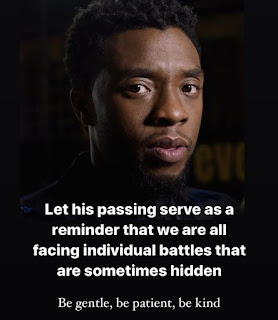 Can you imagine the grit it took to show up on set -- and for his many off-screen personal appearances to support children in hospitals -- while suffering from the side effects, and the emotional burden, of a terminal cancer?

His quiet courage. His commitment to being there for others despite his own personal pain. Showing up and getting the job done. Generous to his colleagues. Kind to children. Grateful to his mentors. He personified qualities associated with the very best of our national character. He was a great action hero because he was a real-life role model.

Boseman's story is also about sponsorship. This compilation celebrates the sponsorship story that shaped him. Find ways to invest in the dreams and skills of others. Support the artists you love. If everyone gives just a little support, we will rise up together to our potential.

Boseman gave a moving address at his alma mater, Howard University, in 2018. 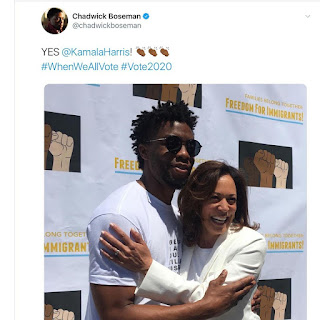 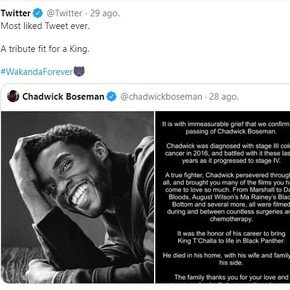 While we are gutted by this loss, we can take comfort in the triumphs he shared. Learn from his example. 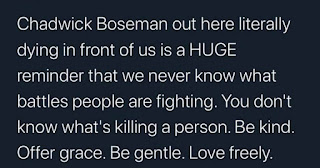 Rest in power King T'Challa. Art is life. You were young, black and talented. And you sparked a worldwide phenomenon.


Tributes from his peers ... includes a quote from Benedict Cumberbactch who is not on social media.
https://www.eonline.com/news/1183244/chadwick-boseman-dead-at-43-chris-pratt-octavia-spencer-and-more-react?fbclid= 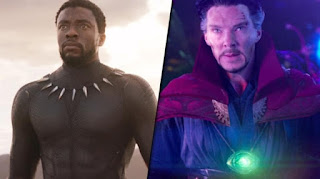 Video tribute from Marvel Studios. At the end of this tribute, and the Disney one, is this quote:
"You will always be our king."

A few days after Boseman's passing versions of this meme began making the rounds on social media. 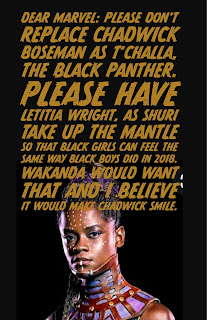 I'll admit I'm the Jon Snow of Comics -- I know nothing about the canon for these characters. But Letita Wright as Shuri brought so much to her character. She can elevate Shuri from a favorite Disney Princess to a powerful Queen of Wakanda. Personally, I would love to see this transition take place.


Boseman on the set of Black Panther with director Ryan Coogler 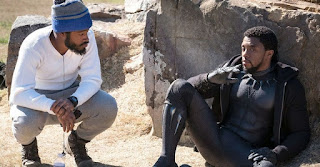 From the official statement by Coogler...
https://www.marvel.com/articles/movies/marvel-studios-black-panther-director-ryan-coogler-on-the-legacy-of-chadwick-boseman
"Chad deeply valued his privacy, and I wasn’t privy to the details of his illness. After his family released their statement, I realized that he was living with his illness the entire time I knew him. Because he was a caretaker, a leader, and a man of faith, dignity and pride, he shielded his collaborators from his suffering. He lived a beautiful life. And he made great art. Day after day, year after year. That was who he was. He was an epic firework display. I will tell stories about being there for some of the brilliant sparks till the end of my days. What an incredible mark he’s left for us.

I haven’t grieved a loss this acute before. I spent the last year preparing, imagining and writing words for him to say, that we weren’t destined to see. It leaves me broken knowing that I won’t be able to watch another close-up of him in the monitor again or walk up to him and ask for another take.

It hurts more to know that we can’t have another conversation, or facetime, or text message exchange. He would send vegetarian recipes and eating regimens for my family and me to follow during the pandemic.  He would check in on me and my loved ones, even as he dealt with the scourge of cancer.

In African cultures we often refer to loved ones that have passed on as ancestors. Sometimes you are genetically related. Sometimes you are not. I had the privilege of directing scenes of Chad’s character, T’Challa, communicating with the ancestors of Wakanda. We were in Atlanta, in an abandoned warehouse, with bluescreens, and massive movie lights, but Chad’s performance made it feel real. I think it was because from the time that I met him, the ancestors spoke through him. It’s no secret to me now how he was able to skillfully portray some of our most notable ones. I had no doubt that he would live on and continue to bless us with more. But it is with a heavy heart and a sense of deep gratitude to have ever been in his presence, that I have to reckon with the fact that Chad is an ancestor now. And I know that he will watch over us, until we meet again. "

LA Times
"Chadwick Boseman: an appreciation"
https://www.latimes.com/entertainment-arts/movies/story/2020-08-29/chadwick-boseman-appreciation-black-panther
Excerpt: "We now know that Boseman was, in fact, guarding a close personal secret: a four-year battle with cancer that came to light Friday with his death at the age of 43. The news struck a devastating blow to an entertainment industry already in turmoil; it was also an instructive reminder, in a world that feeds relentlessly on celebrity gossip, that some of the toughest wars are waged in silence. The rigors of an actor’s craft and the struggles of a body’s survival are very different things, though our movie love can sometimes dare us, against our better judgment, to reconcile the two — to try and make sense of the gap between the actor we love and the person we may think we know. And it seems clear that, on screen and off, Boseman had a particular genius for understatement, a genius that he wielded with unerring purpose."

"What to Know About Colon Cancer"
https://www.nytimes.com/2020/08/29/health/colon-cancer-chadwick-boseman.html?referringSource=articleShare

Kamala Harris, the Obamas, Hollywood stars react to Chadwick Boseman’s death: ‘This is a crushing blow’
The shock of the tragic news amplified the devastated reaction worldwide, as thousands fans, as well as Hollywood stars, politicians and athletes, mourned the beloved actor on social media.
By Emily Yahr
https://www.washingtonpost.com/arts-entertainment/2020/08/29/chadwick-boseman-dies-reactions-kamala-harris-obamas/

Goalcoast Video
"He hid this secret for 4 years in plain sight" Includes highlights from his Howard University speech as well as footage of him with young cancer patients, and press conference where Black Panther cast supports him as he shares difficult story about two young boys claimed by cancer.
https://www.facebook.com/goalcast/videos/2802576333312408/

More on the impact of Black Panther in this post here on the blog from Feb 2018.
https://stuartngbooks.blogspot.com/2018/02/concept-art-and-costumes-for-black.html