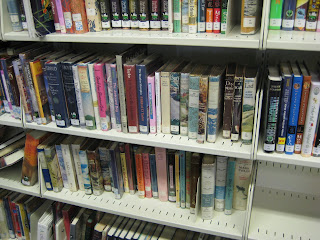 Two rows of books by Albert Payson Terhune, circa 2009, from the Emanuel Einstein Public Library in Pompton Lakes, NJ.  (pictured below). Terhune was a nationally known author, journalist, and magazine short story writer. He even appeared on radio. Now his hometown library is one of the few places you'll find so many Terhune books in one place... 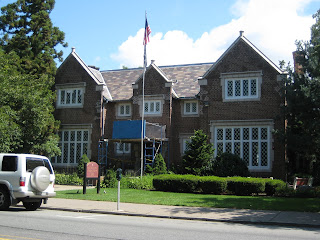 UPDATE AUGUST 2018
Every year in August, collie and Terhune fans spend a weekend celebrating all things APT (fan slang for the writer) at the Sunnybank Gathering. Here's a link to the website with more info on this fan fest and charity event https://www.colliehealth.org/sunnybank-gathering/

In 2018, the dedicated volunteers behind the annual Sunnybank Gathering accepted my donation of these Terhune titles pictured below. The 12 Grosset and Dunlap editions in this gift are a favorite of collectors. These editions are reprints, not 1st printings, but they are prized for their colorful dust jackets. (The artwork was a commercial illustration job by noted wildlife artist Bob Kuhn.) Many APT fans grew up reading these editions of Terhune's collie stories. I was one of many who discovered these in the local library as a young reader. It was beyond moving to learn the special honor these books would help launch. 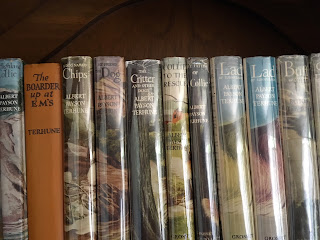 Barb Backer was a long-time Sunnybank supporter and local resident of Pompton Lakes. She was also the post office employee who answered all the letters children wrote over many decades tying to contact Terhune. Barb's replies gently explained that APT was no longer with us and would include some information on the Sunnybank park. Barb was a familiar face and popular speaker for years of Sunnybank Gatherings. I was lucky to meet her and hear her at these events. She passed away in 2016. Thanks to the Sunnybank Gathering core volunteers, these books became the inaugural titles in the Barb Backer memorial Terhune collection in the Children's section of the Emanuel Einstein Library. 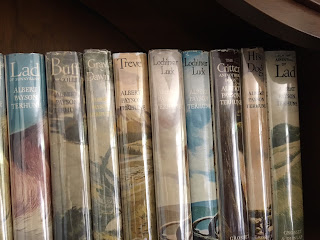 Terhune's book "Lad: A Dog" was an instant best seller and remained so for decades. It was exciting as a young reader to learn these adventures were based on a real collie! The real Lad lived from 1902-1918. Terhune's stories about Lad first appeared in large circulation popular magazines of the day. Lad the book was released in 1919. This era was a seminal time in collie history. The breed was just getting established in America. Thanks in part to Terhune's stories, collies soon soared in popularity. Collies came to be known as "Lassie dogs." Lad made that public embrace happen long before the 1940 classic, "Lassie, Come Home."

The Von Riper Hopper House, the local historical museum at nearby Wayne Township, has a room of Terhune artifacts. There is even a lock of Lad's fur in the center of this showcase!! (center in the photo below). This link has a virtual  tour of this museum: https://www.waynetownship.com/van-riper-hopper-house-tour.html 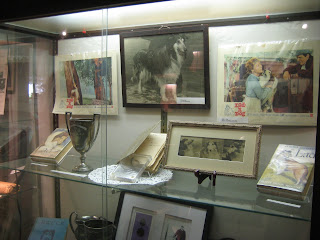 And even though Lad lived over 100 years ago, people still visit his grave. 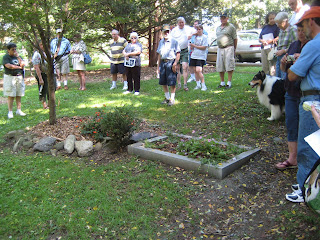 Lad's world was The Place ..... also known as Sunnybank.... on the shores of Pompton Lakes in New Jersey. This link, with photos by a visitor who came from Viet Nam, gives an excellent summary of the sites at the park: https://www.waynetownship.com/terhune-park.html 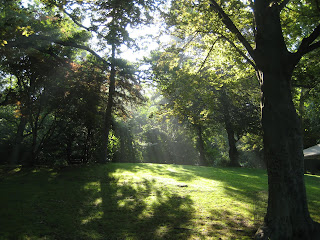 Every summer, fans and scholars of the author Albert Payson Terhune attend the Sunnybank Gathering. In the 20s and 30s, he was one of the best known and most beloved writers in America. He had a long career as a journalist, sportswriter, and novelist, but he was best known for his dog stories, most of which were based on real collies that he owned and raised as his country estate in NJ. "Sunnybank" was originally 40 acres with a huge home and working farm. The house no longer exists, but thanks to the efforts of a smart, dedicated, amazing woman named Claire Leishman, and other fans, 9.6 acres of Terhune's land is now preserved as a park. The beautiful grounds still evoke memories for fans of Terhune stories. Lad and many other of Terhune's canine "chums" are buried at Sunnybank. The Sunnybank Gathering raises money for the restoration of the park, and for the Collie Health Foundation, which funds projects to find causes and cures for canine disorders.

"Lad: A Dog" was the best known Terhune dog story. Sam Savitt (1917-2000) was a famous equestrian artist. He was also a prolific author-illustrator of children's books. Savitt did the cover and illustrations for the 40th anniversary edition published by Dutton in 1959.(image below from Google Images).

This link on the blog shares some Savitt illustrations from the interior pages https://stuartngbooks.blogspot.com/2009/08/more-savitt-art-and-illustrated-terhune.html 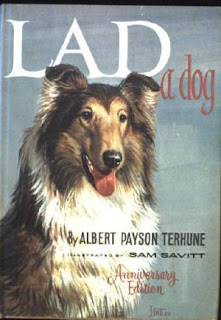 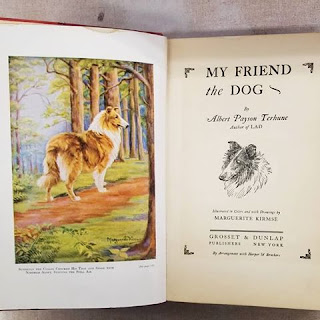 Renowned photojournalist Margaret Bourke-White took pictures of Terhune's collies and estate for the original edition of "The Book of Sunnybank." (image below from Google Images) 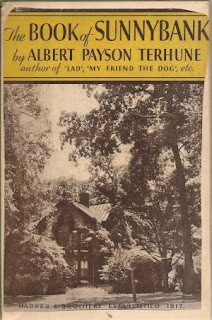 There has been a resurgence of interest in Terhune in the last decades, and it's heartwarming to see support for the preservation and display of these artifacts, most of which hung in Terhune's home. 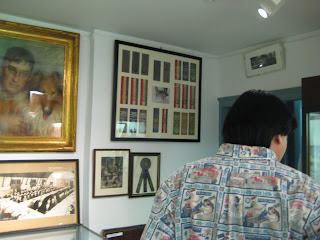 POST UPDATE OCT 1, 2011.... there's a clip on You Tube of newsreel of Terhune at Sunnybank with his dogs: (sadly, this link from 2011 was later removed from You Tube and has been inactive for several years)
http://www.youtube.com/watch?v=SO-V7KNFYY8


BOB KUHN
In glass case below is a copy of the book about Terhune's blue merle collie "Gray Dawn", along with a photo of the real dog. Cover art for the book is one of the Bob Kuhn dust jackets from the Grosset and Dunlap series. Kuhn (1920-2007) reportedly denied creating these beloved portraits of Terhune's canine heroes, even though the "Kuhn" signature appears on at least one. Perhaps he wanted some distance between this early side job and the later fame he found as a wildlife artist. Meanwhile, many current collie owners are delighted to know researchers have established that families of AKC collies today are descendants of Terhune's dogs! 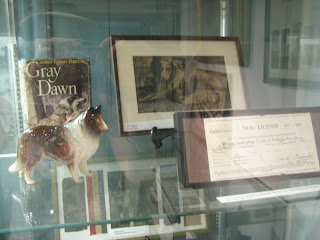 Here's a closer view of the "Gray Dawn" cover by Bob Kuhn. (from Google Images) 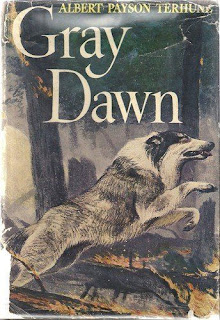 These are two of my favorite Kuhn covers. You can see his signature between Lad's front paws. The "Sunnybank Home of Lad" eluded my collection for a long time, but is one of the first Kuhn covers I remember seeing in my public library. The dogs look so happy, and the house looks like a good representation of the Terhune home. 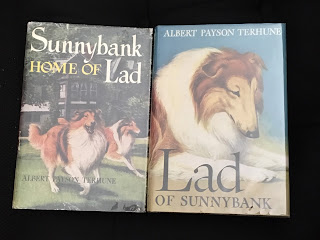 Some of the Grosset and Dunlap dust jackets have a list of the titles and some of the cover illustrations on the back. 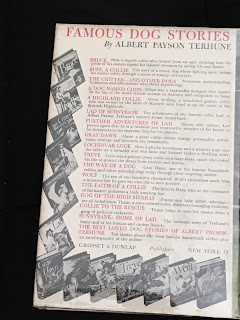 PAUL BRANSOM
Illustrator Paul Bransom (1885-1979) was a friend of Terhune's and knew many of the Sunnybank collies. Bransom illustrated many of the magazine stories where Terhune's dog tales first appeared. Bransom also did dust jacket illustrations for early editions of some of the books.

Here's  Bransom's stunning color cover for the 1st edition of "Lad of Sunnybank." 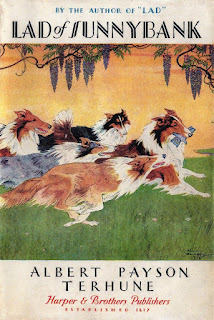 The original for this artwork is in a private collection. It's rare for illustration originals to survive. They were considered commercial work when produced and not fine art worth preserving. The demand for Bransom originals of the Terhune collies speaks to the century old appeal of this art and the characters it captures.

Terhune wrote during a golden age of illustration. Several of the most highly regarded artists of this era produced images for his stories:  Diana Thorne; Charles Livingston Bull, Robert L. Dickey among others.

The Von Riper Hopper house is home for this Bransom original. Bransom did several portraits of Gray Dawn for magazine stories and for books. This one shows the dog with his favorite toy, a flannel elephant. 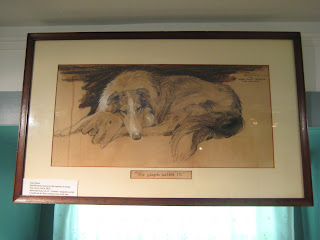 I was a fan of the books as a child. My mental images of Terhune and his collies were formed by the art of Bob Kuhn and Sam Savitt. I started collecting Terhune books once I met Stuart. Looking for Terhune books gave me something to do while Stuart and I visited bookstores together. That was well over 25 years ago. I've completed my Terhune collection, but I still like to go to bookstores with Stuart. Sadly, there aren't as many good, general used bookstores around today. The internet now features Sunnybank websites, and has made books like the old Terhune titles accessible, but it was more fun finding them among shelves of other children's books or dog books.
Posted by aw at 6:06 AM