While the story of Maleficent was about a dark character --- the “Disney film” guidelines allowed for only three Dark Faery supporting roles in the design. 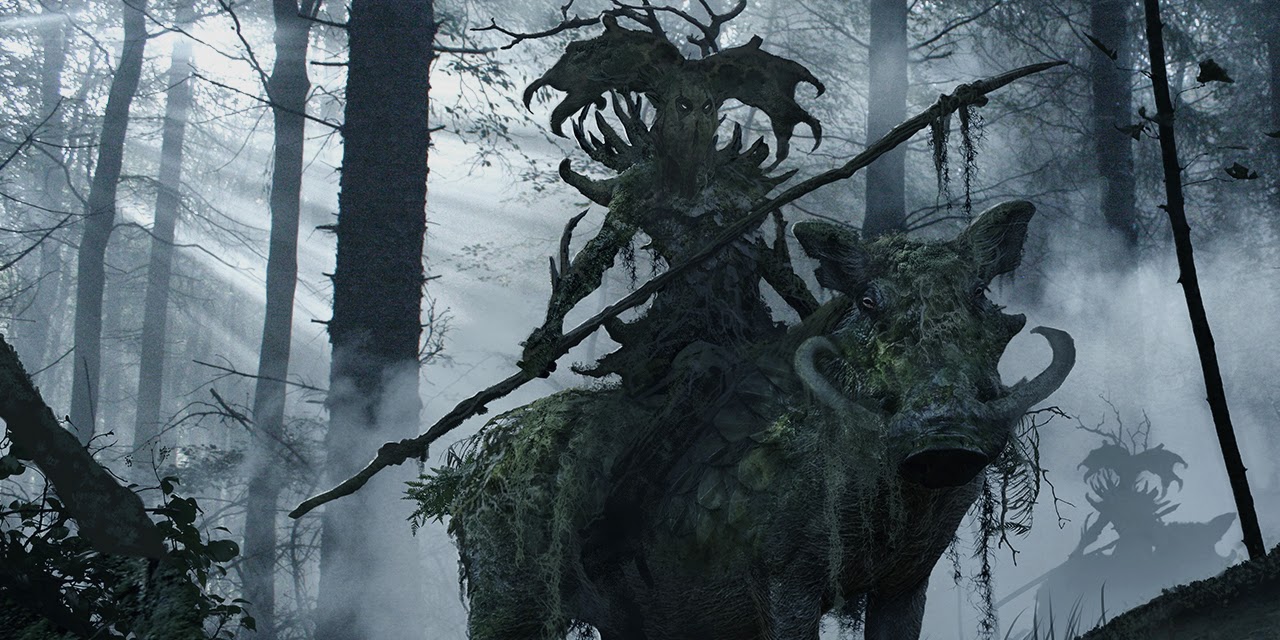 And quickly was accepted as concept art for the dark faeries --- but the forces of power at the studio insisted the boar and sentinel were two distinct characters, so in their view, this image depicted two of the three dark faeries. After much discussion, the boars were allowed without counting as one of the three.

In the end, the biggest challenge was the desire to create dark faeries with reptile or insect like qualities. Many designs were rejected as too dark --- but one artist (Howard ???) came up with a solution for the wooden bramble serpent that everyone could agree on. 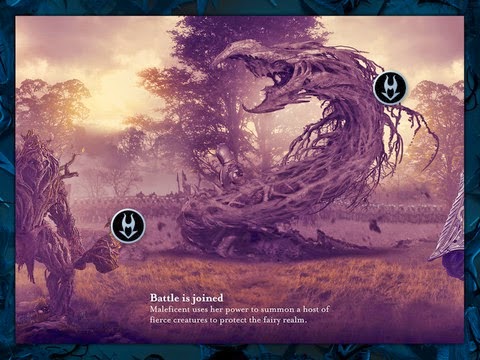 The Dark Faerie world landscape inspired a number of paintings with various versions of large pits and crevasses in the ground. This sample isn't one of the "dark" ones .. but shows the scale in the images that were shared at the talk...

In (early versions of?) the script, the castle was described as being made entirely of iron (to protect against Maleficent). For various reasons, this turned out not to be practical, so different castle concepts were explored.

Here's Dylan's concept painting of the Castle .. this image was part of the pitch portfolio...

Robert was always a fan of the WB classic films like Robin Hood and Sea Hawk and these sorts of period films helped inspire the direction for the castle. 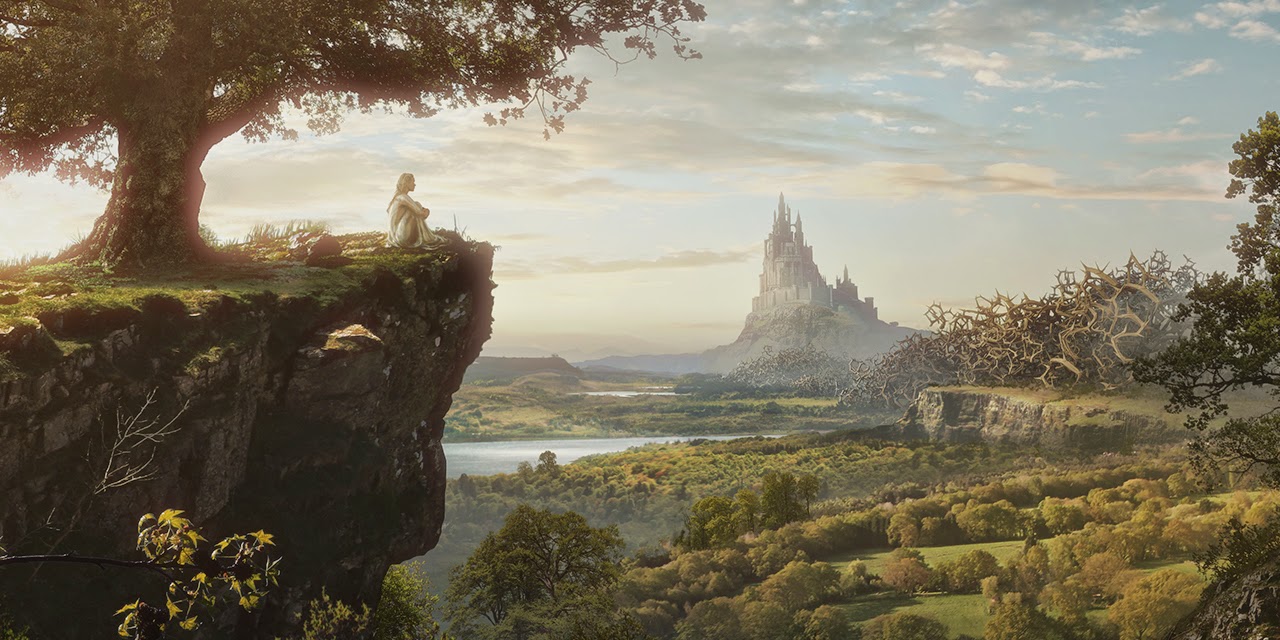 This part of the discussion continued on a tangent about directing and using visual and special effects:

Robert credited Cinematographer Dean Semler with lots of ideas on how to light the sets and create an atmosphere that would blend seamlessly with the matte paintings and other visual effects that would be part of the final images.

Here's a live-action shot from the thorn wall set  ....

and here's the shot with Dylan's matte painting overlay .... 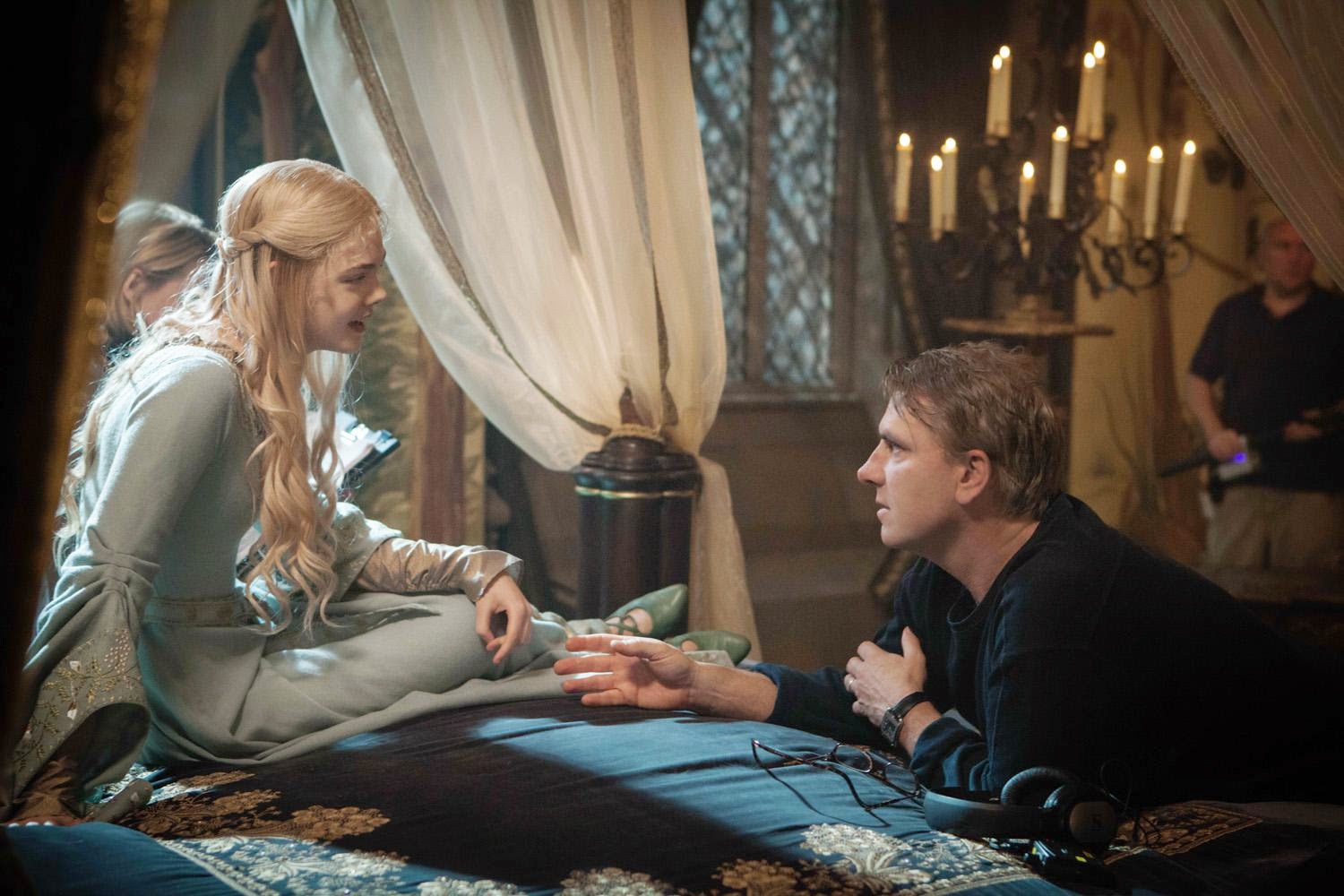 He discussed how a lot of the job is about being able to judge a performance --- to understand the rhythms of a scene in a sequence … and how the dialogue has rhythms in a scene. There is an element of timing … the beats and moments in a performance … and also making sure that the tone of the performances are appropriate for that section of the story. 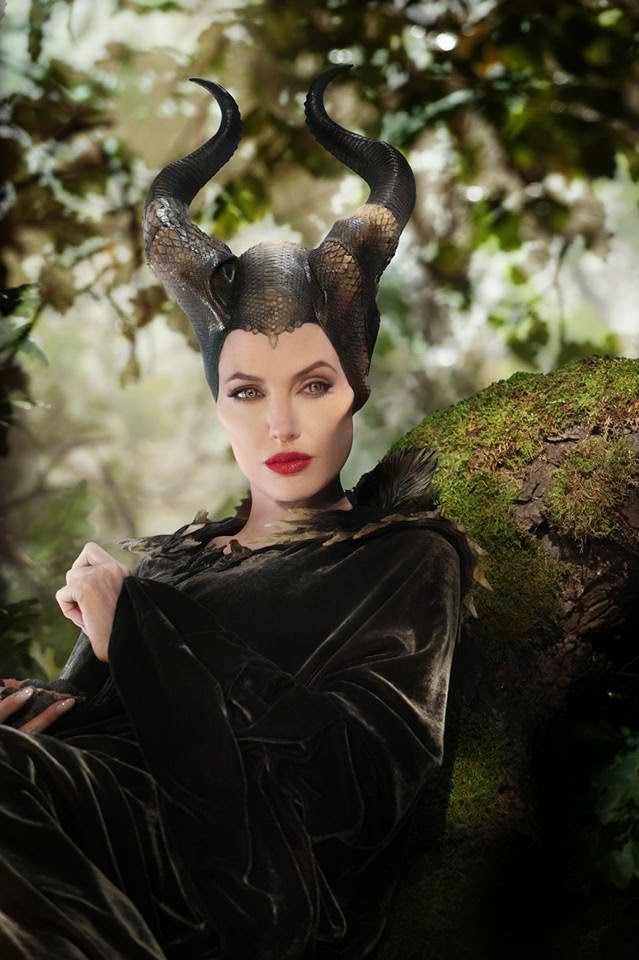 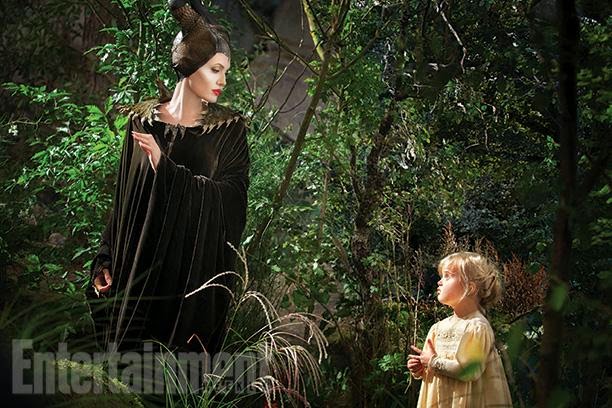 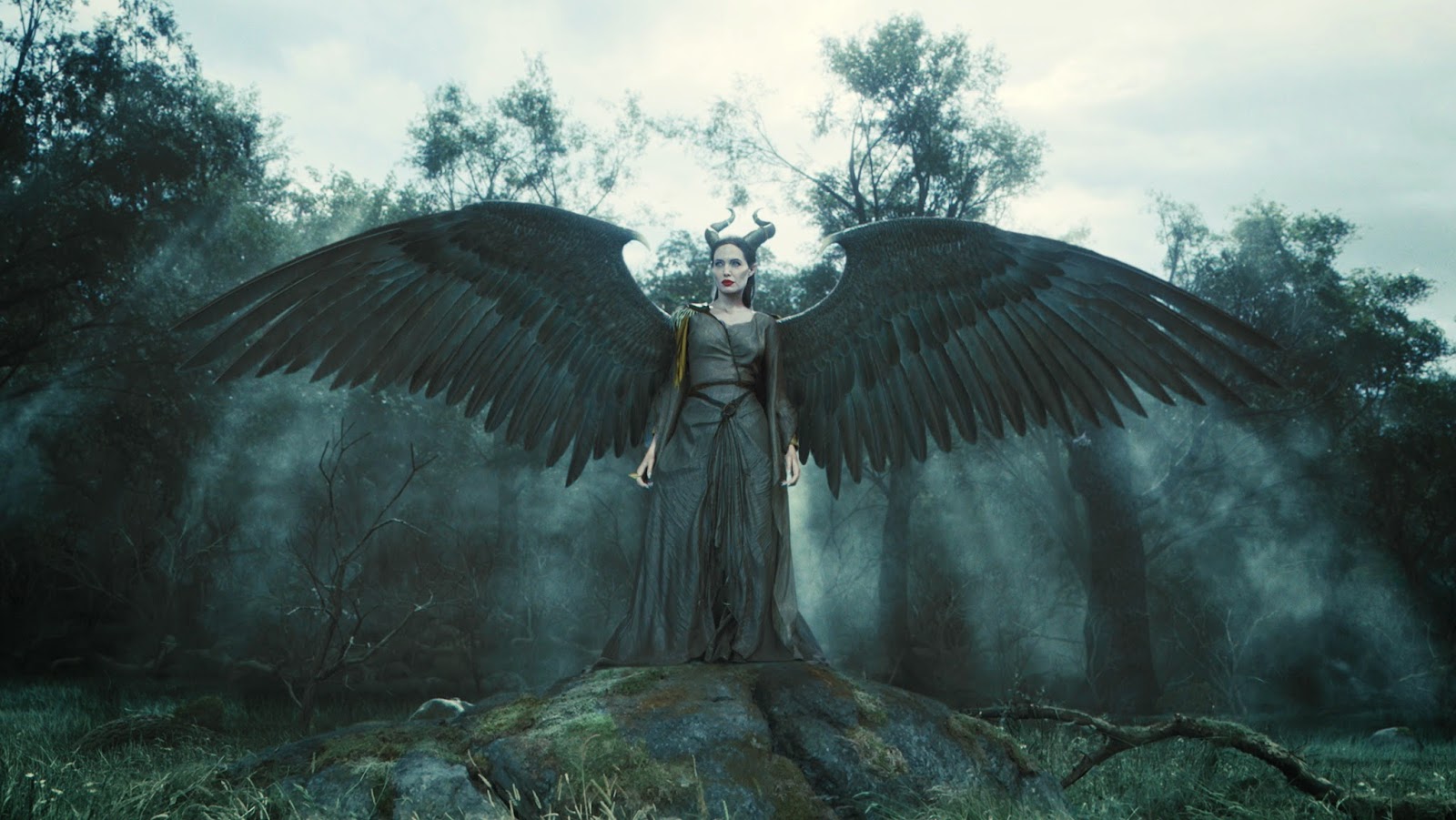 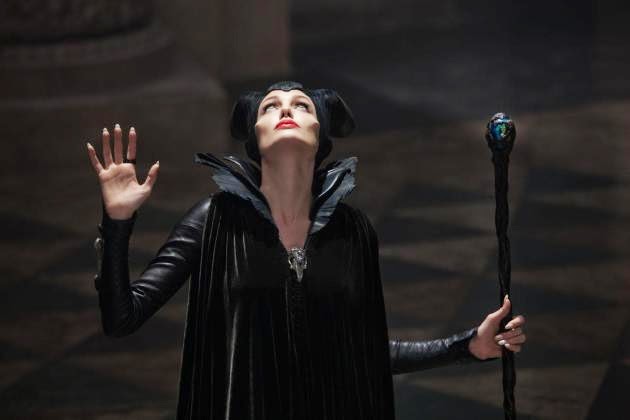 HUMAN WORLD
All artwork and ideas for sets and locations where real actors would be working in them, and real cameras had to be able to move around, etc. had to able to translate to nuts and bolts. Those designs had to be able to be rendered by real materials and understood by the different departments in charge of producing it. The design and artwork had to be respectful of the needs of physical production ... and to scale to work with live action performances. 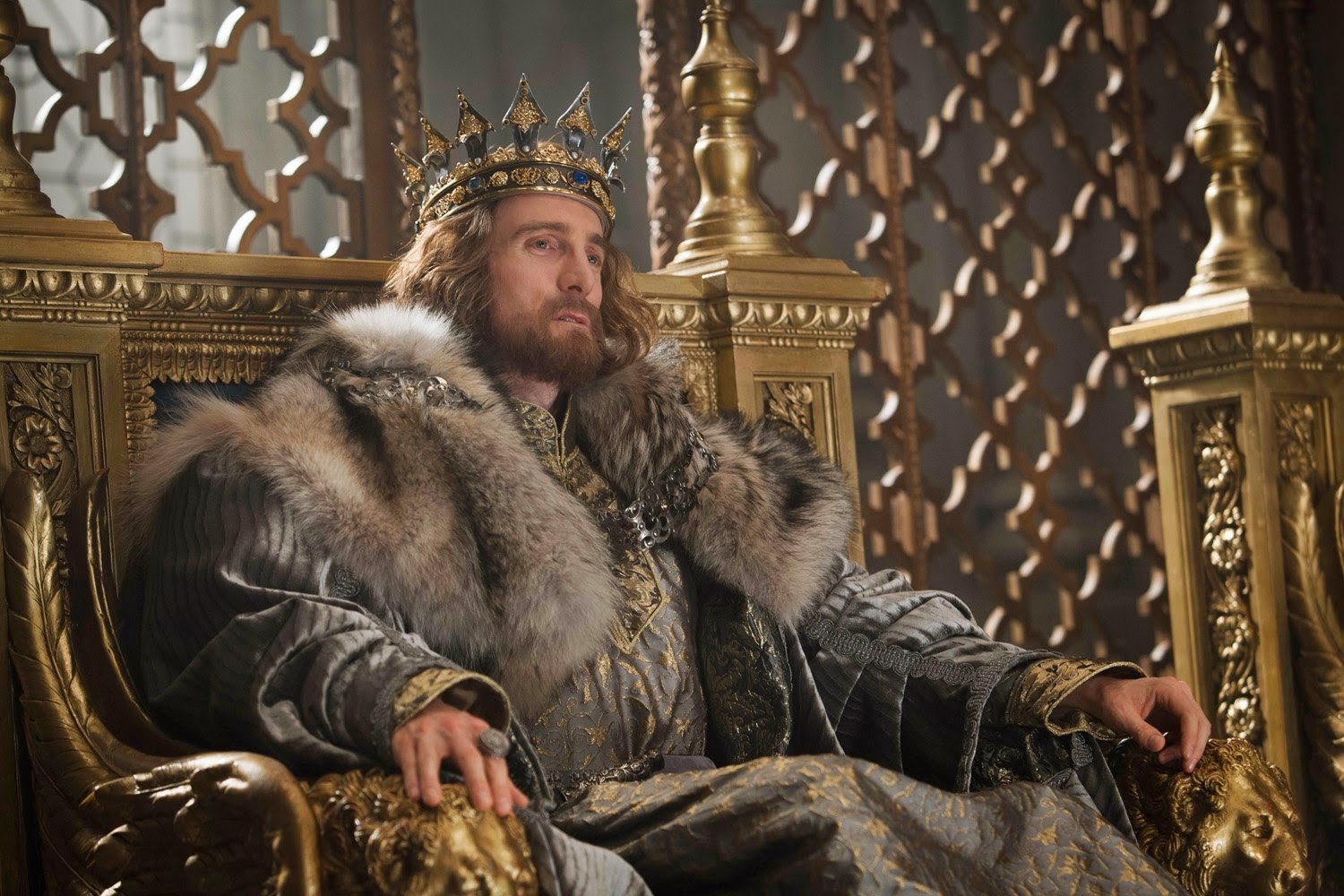 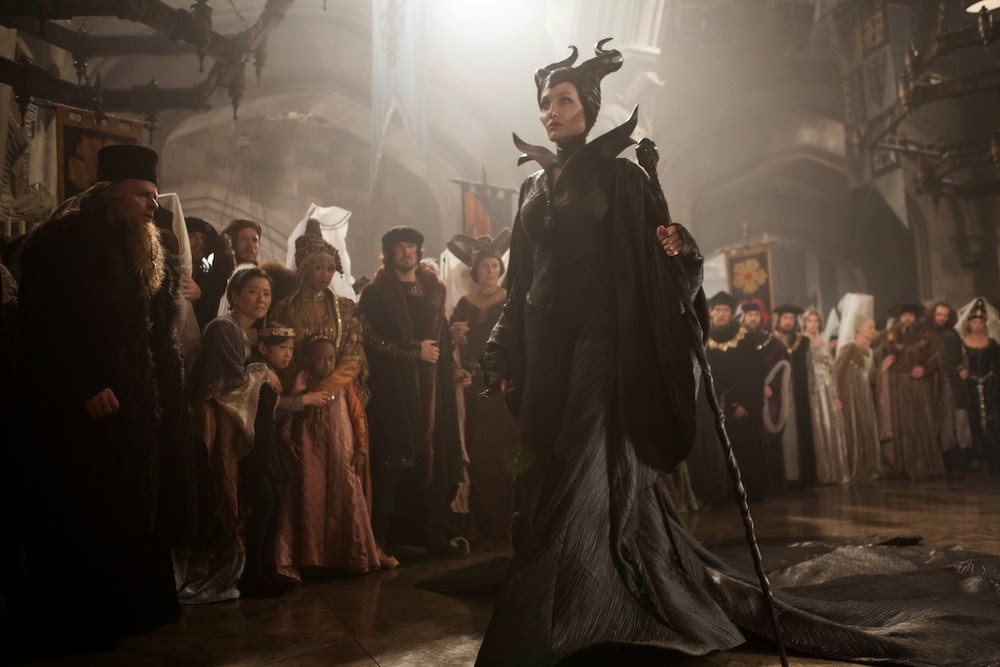 DRAGON
Since this Maleficent’s dragon is transformed from a raven --- lots of the concept art explored the use of feathers and other bird-like features. The final concept for the dragon ended up being close to the original dragon in the pitch portfolio.

In the talk, they shared Dylan's painting of the dragon fight scene that was included in the pitch portfolio. Regret I haven't yet located that Dylan image online .. but it was very similar to what ended up in the film 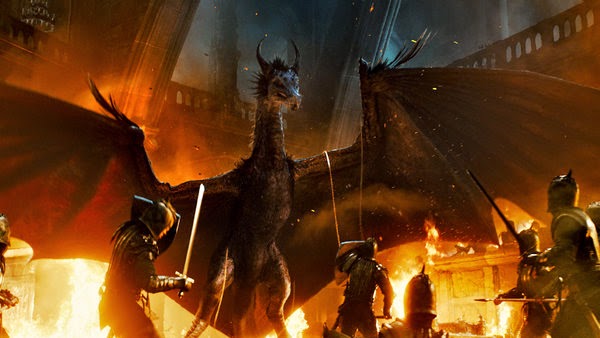 Here is where some of the darker elements of the environment could be explored. This is Dylan's painting:

THORN WALL
A lot of inspiration for concept art for these scenes came from not only the animated film, but also nature and found objects. Going back to the natural world … observing and paying attention to the details there. 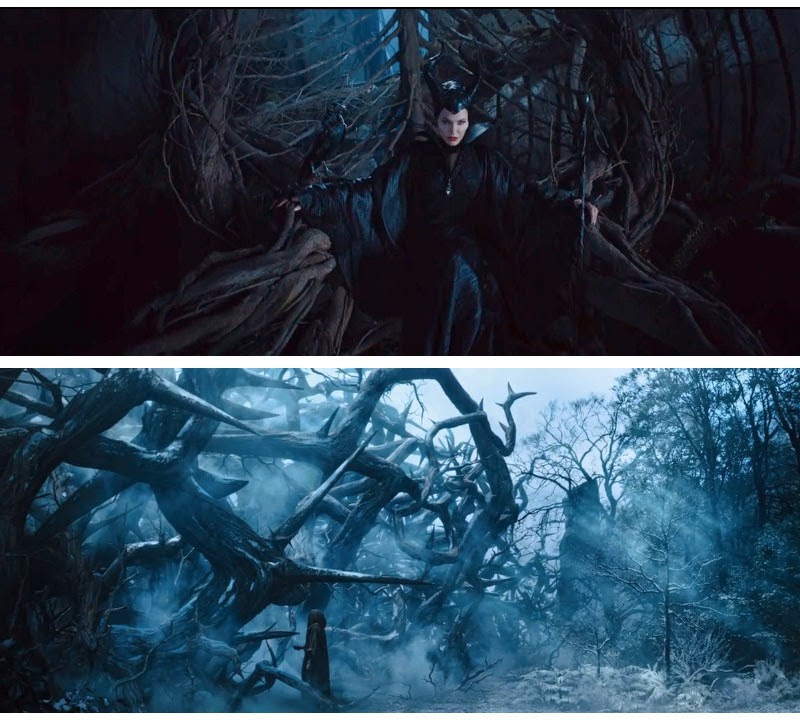 The classic animated film .. and the Eyvind Earle graphic look ... was also an important reference ... 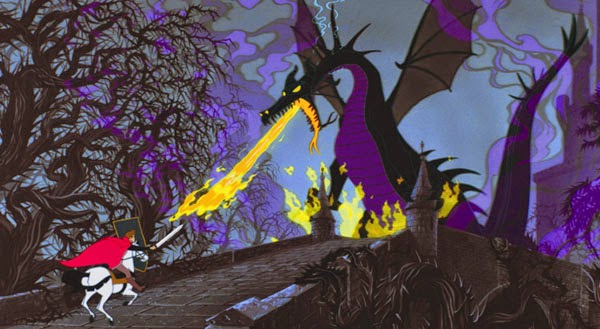 The audience was encouraged to ask questions during all phases of the presentation. In the final round of questions as the evening wrapped up, Robert addressed some of the moments in the film that didn’t make the final cut.

He described how first act of the script was much more elaborate, and a lot of that didn't make it into the final film. Also, Stephan and Maleficent were close as adults and had an actual “break-up” that didn't get included in the final film.

At the end of the presentation --- Robert discussed a bit of what this directing process has been like: “It’s like living through an earthquake…. But you like earthquakes.” 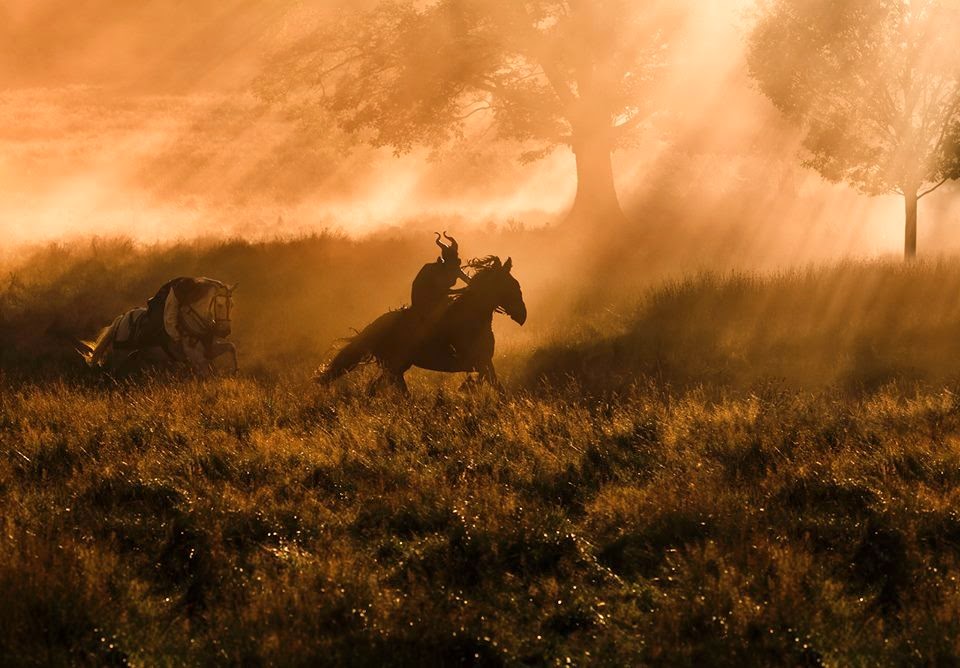 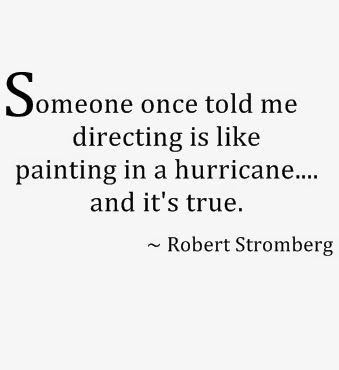 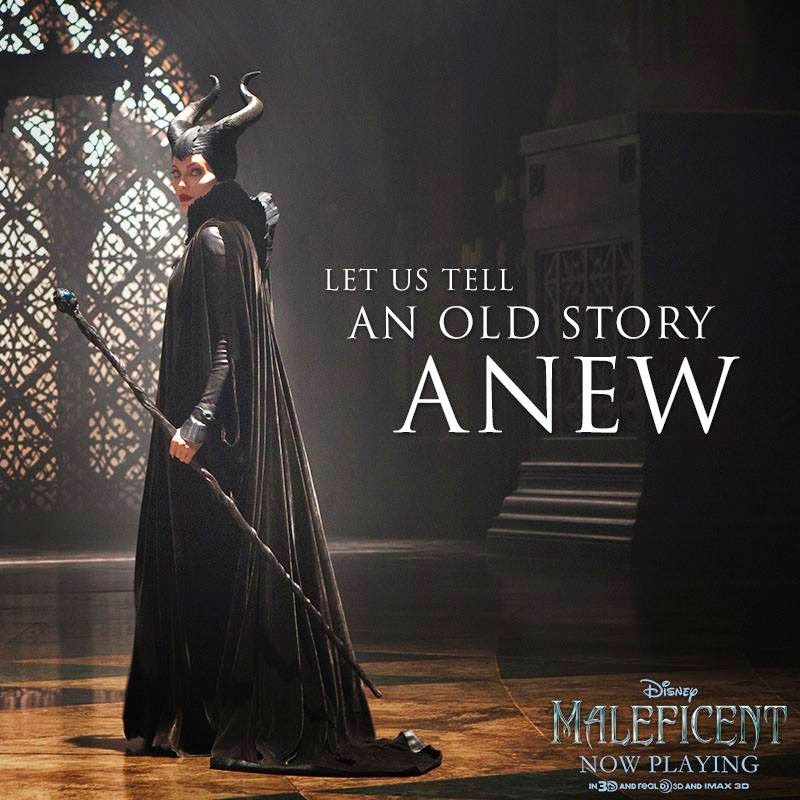 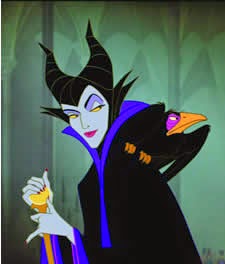 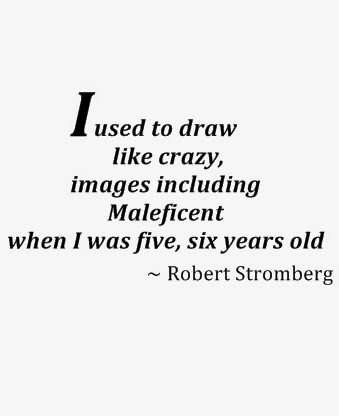 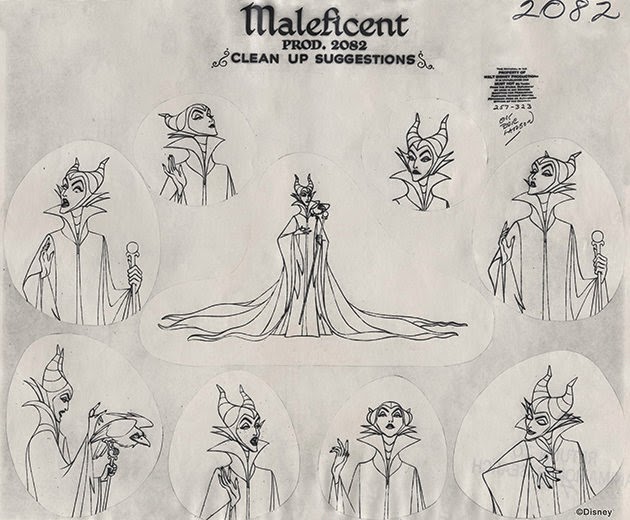 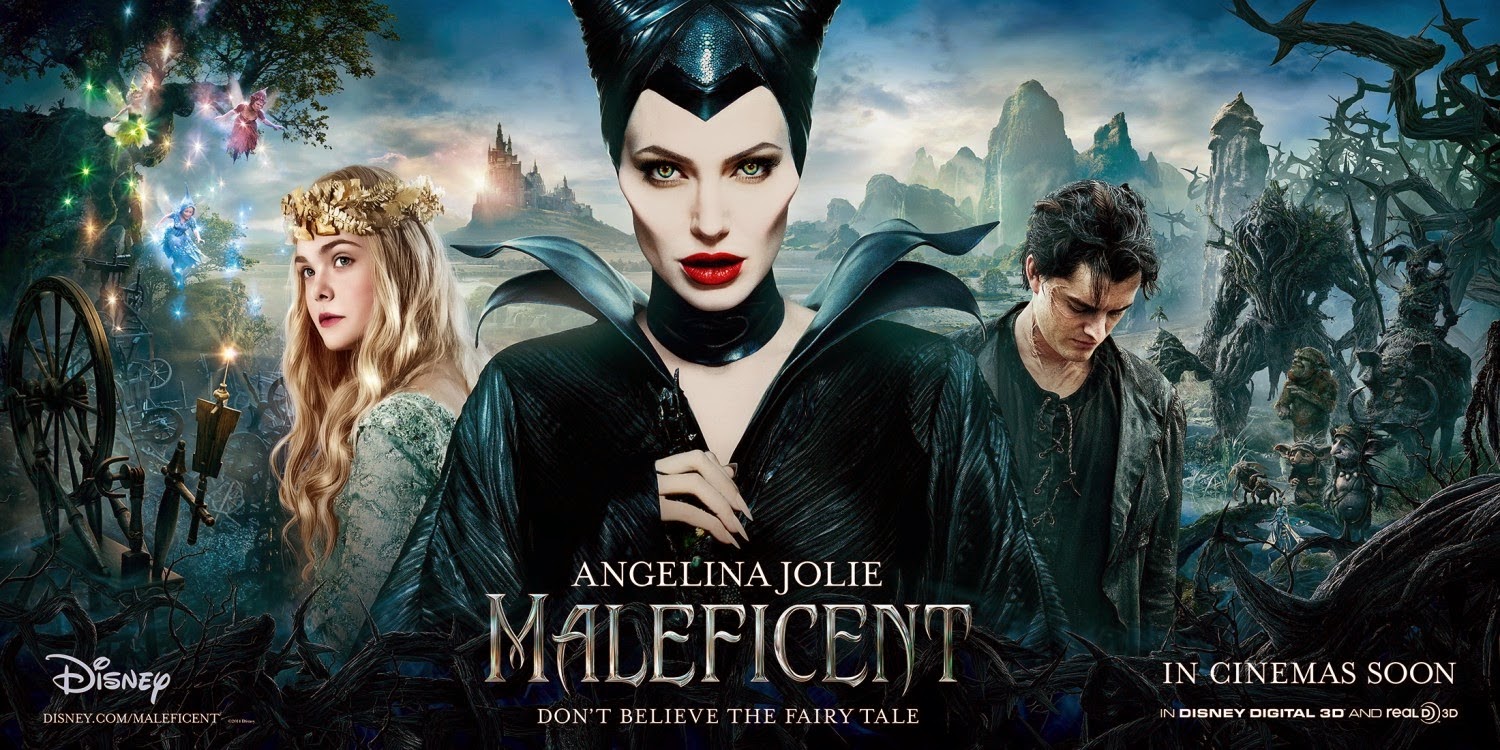 This was my first visit to the Gnomon school .. and the first time I attended one of their events. It was an impressive introduction. They are holding open house/tours in August, Sept, Oct and November. Here is link to open house info on their website http://www.gnomonschool.com/open_house/.

On the Gnomon School general website http://www.gnomonschool.com/ you can also check their "Events" page to see video from some of the previous talks. Not all the events can be posted online afterwards. No news yet if this talk will have an online version.

As an aside, I'd like to add one thing Dylan NEVER mentioned, but I want to include here for those of you reading this post who are out of the SoCal area: Dylan has 3 art courses on DVD!

These are available for sale through the school: http://www.thegnomonworkshop.com/store/product/55/The-Techniques-of-Dylan-Cole-1#.U7EYcJRdXTo

So why two posts and all these images ..... it's for those you who were interested in the event, but couldn't make it. These posts .. and the blog.. are here to help you experience a bit of my adventures related to books, films and art. Please spread the word about Maleficent --- it's amazing!

Will there be an "Art of Maleficent" book??? Sadly, not that I'm aware of. The closest to an art/making of book for this film is a section that appears in the just released Charles Solomon book, "Once Upon a Dream: From Perrault's Sleeping Beauty to Disney's Maleficent". Yes ... we will have the book for sale on the Stuart Ng Books website. 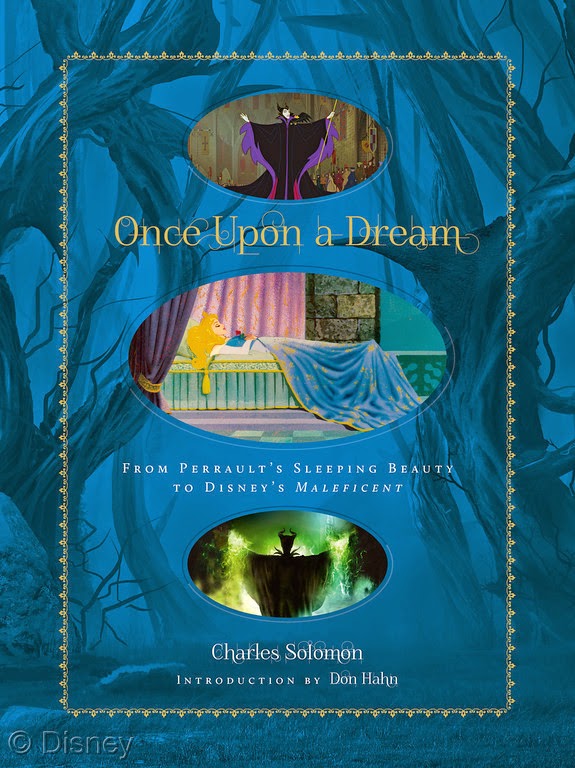 UPDATE 9/8/14 -- IN FACT, we've just announced a MALEFICENT BOOK SIGNING!!! We'll have four contributors to the "Once Upon a Dream" book -- Author Charles Solomon, Producer Don Hahn, Director Robert Stromberg and Production Designer Dylan Cole. The signing will be held on Sept 23rd and we're co-hosting the event with Center Stage Gallery in Burbank. Can't make the event? NO PROBLEM .. you can pre-order a signed copy on the SNB website. http://stuartngbooks.com/

And now, here's some EDITORIAL COMMENT from your friendly Bride of Bookseller.....

A bit of commentary from me that hopefully will help YOU understand what we do FOR YOU a bit better...

As many of you know, I'm no fan of AMAZON. It's been the death of many small bookstores. Yes, Amazon does what it does very well... it brings a wide range of books (and everything else) to folks who might not otherwise have access to these items. But it's also helped fuel a culture of consumer habits that have treated brick-and-mortar stores like local hands-on catalogs where customers can "check out" items of interest, then shop for the cheapest version on line. I get it ... people want cheap goods: but at what cost???

Do customers realize these habits kill off the selection and/or variety of items available. Walmart and Amazon thrive when they overtake a market by supplying the cheapest version possible, and kill off any other consumer option. Maybe we're all okay ending up with just one brand of soap that we can all buy really cheap, but if you think about it ... don't we really want MORE purchasing power than that??

Is our shopping experience just about essentials? What about the serendipity of finding something really GREAT that wasn't exactly what you were looking for .... markets for smaller, niche items and interests .. and not to mention the loss of jobs and neighborhood amenities (like your local bookstore). We risk LOSING ALL THIS when we shop just for costs and not for benefits. Small shops and businesses are great resources --- they select items with THEIR UNIQUE CUSTOMERS in mind, and can educate their patrons about getting the most out of what they sell. Online suppliers like Amazon offer one level of customer service, determined by what's "cost effective" for them. Maybe I'm old school, but I find it charming when a shop owner takes notice of my patronage over time and I can ask them for recommendations. On the other hand, it feels kind of creepy to me when even a first-time online purchase triggers a parade of algorithm-inspired suggestions under the guise of  "Other customers who bought this also liked...." Is there more value in being a customer or a profile being tracked by machines? When we find a cool item in a small specialty store, but leave it on the shelf to buy it later online and save a few extra dollars, are we really THINKING about what we're endorsing and supporting???

As a small business, Stuart Ng Books can't compete with Amazon ... so Stuart does something different. We typically DON'T sell books that are in-print and for sale at other retail sources (Barnes and Noble; Amazon, etc). Stuart finds and provides books that you can't get from major retailers, often because our stock is small prints runs or caters to a niche market. For example, Stuart carefully selects the self-published artists sketchbooks we carry, and we are the chosen retail outlet for many artists who create their own sketchbooks, but don't want to handle mail-order sales themselves. These services we provide are LABOR INTENSIVE with thin profit margins, but they have helped us stay around while many other small booksellers have folded. It's adapt to survive for bookstores these days. There are some Stuart Ng Books listed on Amazon (because we have some patrons who don't know how to find us except through that source).

When we DO offer books currently in print and available from other sources, we try to supply them with an added exclusive that our appeals to our patrons (and they are willing to wait for). We respect that YOU have a choice where and how to spend your bookbuying dollars. When you can order the book online someplace else... why buy it from us? Usually, it involves something we try to make fun for all involved  -- a book signing !!

For example, with the Solomon book on the Art of Disney Golden Books, we hosted a signing at Tina Price's Center Stage Gallery in Burbank. We had Charles Solomon there, along with 6 Disney artists whose work appears in the book. Our patrons we able to purchase signed copies at the event .. OR THROUGH PAID PRE-ORDERS. We are usually able to include personalizations for pre-ordered copies as desired. The logistics of these events -- both on-site and in handling the mail orders -- are worth a post on their own... and you can see a bit in the post for the Disney Golden Books signing. So that's the story folks ---- Because we love these books and artists as much as you do, we try to bring you something special for the books that are current and in our niche.

Right now.... we don't have a signing scheduled for Once Upon a Dream .... BUT ... Stuart's working on it! And you're learning that first here on the blog :)

Books matter --- and your patronage is appreciated. Thanks for reading! 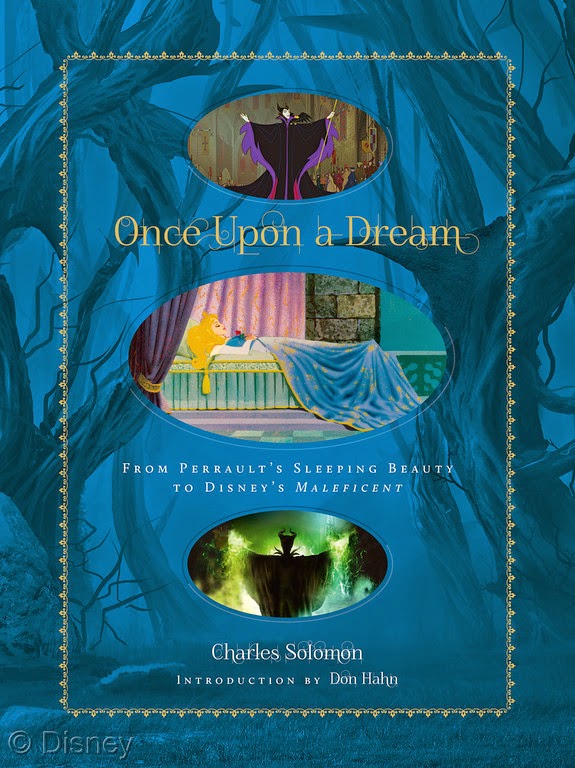