Get Inspired - Houdini & Masters of Illusion exhibits at Skirball, updated 9/9

We visited the Skirball Cultural Center to see two exhibits: 'Houdini: Art and Magic' and 'Masters of Illusion: Jewish Magicians of the Golden Age ' THE HOUDINI SHOW CLOSED Sept 4th.

Masters of Illusion is OPEN through Jan 8, 2012: www.skirball.org/exhibitions/masters-of-illusion 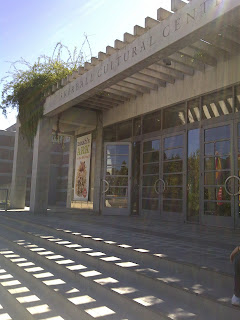 If you like magic or history of magic, these are great exhibits to see! As much as I enjoyed the Houdini exhibit, I liked the Masters of Illusion show even more. Sadly, photography is prohibited for both.. so no pics here on the blog of artifacts on display.. but you can see some images on the Skirball website (www.skirball.org).

and there's a super yummy restaurant on site.
In the Masters of Illusion exhibition, you'll see a real magic wand.. and learn the role of books and print media in the history of magic. Did you know two versions of the book Discoverie of Witchcraft (that's the right spelling, the books were published in 1584 & 1665).. helped dispel the notion that witchcraft was real, and made safe the practice of tricks and illusions (before that, you could have been condemned for a card trick!). There are newsreel clips of the real magicians in action, but there's something even more magical about seeing the posters, props and costumes.
In the Houdini galleries, it was amazing to see the actual size of the items he escaped from: the trunks, jackets, jugs and even the famous water cabinet (a replica; the original was lost in a fire... ironic, huh?) aren't big at all. I also enjoyed a loop of video clips of modern era magicians doing their riff on Houdini's illusions. It was fun to see Doug Henning again.... and a young Penn and Teller.
Stuart's take on the exhibits was that he wants to figure out how the illusion works. I'd rather not know... I prefer the magic!
So if you want to solve the puzzles... or just enjoy the show... catch these exhibits before they disappear... Houdini has vanished, but Masters of Illusion runs through Jan 8, 2012.
Posted by aw at 5:56 PM