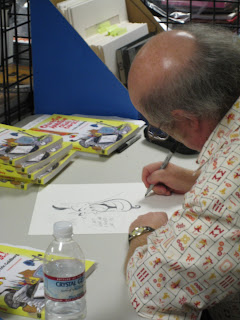 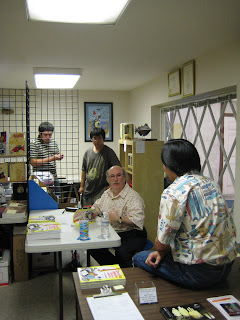 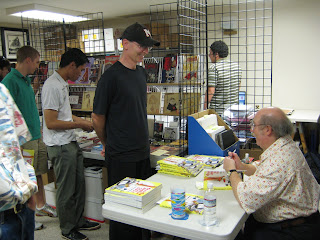 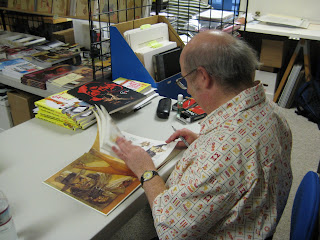 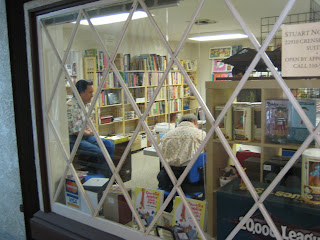 Here are the Eric Goldberg highlights from from his visit to our showroom on 8/23....

..... You couldn't hope for a more charming, funny, experienced, knowledgeable and generous guest (than Eric Goldberg) !!! Holding the signing at the showroom was a much more cozy and cordial setting than Comic Con. We had a steady stream of attendees, and everyone who had a book signed had a chance to chat with Eric. I could write an entire post just on the subjects Eric covered... but for now, here are some highlights:

Eric suggests reading his book in sequence. The book is over 25 years in the making! Over the years, Eric has given a series of lectures and seminars. Drawing on that experience (pardon the pun), he wrote the book specifically to be read in the order it's written to derive the most benefit from the instructions he explains in the text.

Questions from our attending patrons ranged from projects Eric had worked on in the past (often with the person who was asking the question), to mini history lessons on animation, to a amazing pantomimed explanation on how to observe, analyze and learn from different animation gags in classic cartoons.

The icing on the cake with Eric is that he is one of the most animated speakers you'll ever encounter. He has an infectious passion for great animation of the past... and for the legacy left us by great silent film comedians like Charlie Chaplin, Laurel and Hardy, Harold Lloyd and Buster Keaton. It became very clear from listening to Eric that any animation fan... student or pro... should have a working knowledge of the great silent film comedies!

Eric's answers to questions, and his stories, are imbued with his own impressions of the personalities and techniques involved. Eric's too busy working now.... but at some point in the future he really should be giving seminars and lectures, as he is not only a master artist, but a true teaching master as well. Listening to Eric was a good reminder just how relevant past classic animation and silent films are to modern artists! Eric talked at length and with great passion and detail about how the comic effect of a certain character's walk in "One Froggie Evening" was achieved.

Not only has Eric studied classic animation... he also knew so many of the great Disney and WB artists... so his stories bring icons like Chuck Jones and Ollie Johnson to life and into the conversation.

Eric shared all this and more with the patrons who stopped by.... and Eric "got inspired" as well. While browsing our stock, Eric discovered the work of Carlos Nine! Nine is one of those "inspiration artists," (like Claire Wendling) that the marquee players in our industry know about and look to for their cutting edge style. Eric found the Nine book "HOMMAGE A L'ARRIERE-COUR " and was so excited by the drawing style, which he described as "Heinrich Kley on Acid". It was really amazing to watch and hear the reaction of a master artist to another modern master that he hadn't been familiar with prior to this visit with Stuart.

And of course, Stuart was able to broaden this experience for Eric by sharing his own personal knowledge of Nine and the many books Nine has produced. Moments like that made this signing one of the best "Stuart Ng Books experience" events yet.

So for everyone who was able to attend the signing.... they got the live experience and a signed or inscribed book to take home. Plus Eric kindly drew in each book as well! For those of you who pre-ordered a signed book... your copy will also contain a drawing!!

For those of you who are just discovering SNB and the blog...... not to worry.... after over 2 hours of meet and greet and Q and A at our showroom... Eric stayed after and signed all our stock with a drawing!!! Whew!

And Eric did all that work on only a glass of ice water! The least we could do was take him to dinner at one of our Torrance attractions: Back Home in Lahina on Carson Blvd. The restaurant has live music on Saturday nights, and in the Kaamaina tradition patrons at the restaurant and friends of the band will get up and dance impromptu hulas. The music was unusually LOUD that night, but there was a larger than usual crowd of dancers. If any of you get a chance to chat with Eric in the coming months... be sure to ask him how he liked the Hula show!
Posted by aw at 11:08 AM