The official title for this panel held on Oct 20, 2010 about Mary Blair is: "The Academy of Motion Picture Arts & Sciences presents The Marc Davis Celebration of Animation: Mary Blair's World of Color:a Centennial Tribute" Whew! Here's the cover image from the program: 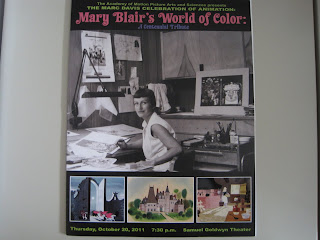 The interior of the program was a list of the panelists and a copy of the essay about Mary Blair written by Lella Smith for the "Mary Blair: A Life's Choice, A Mother's Job" in Tokyo. Ms. Smith is the Creative Director of the Walt Disney Animation Studio's Animation Research Library.

Here's info also included in the program:
"The Marc Davis Celebration of Animation was established in 1994 to provide a forum for established film animators and other experts in the craft to share their expertise as well as explore with their colleagues the challenges of creating animation for the screen. The lecture is named in honor of the man who gave life to characters as diverse as Brer Rabbit, the beautiful Cinderella, Alice (of Wonderland fame), Tinkerbell, and the delightfully wicked Cruella De Vil." (picture below is from Google images)

The back cover of the program featured this image of Mary Blair at work with panelist Alice Davis (wife of Marc Davis)... 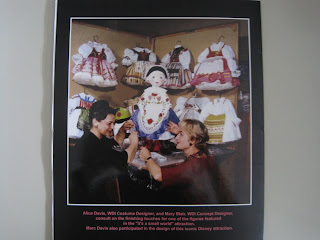 The first panel was with special guests Alice Davis (left), a costume designer at Disney, and Maggie Ricchardson (right), a niece of Blair (photos were not allowed at the panel.. this image is from Google images):

The women shared their recollections of Mary Blair the person, as well as the artist. They both admired Blair's tremendous sense of personal style. Alice stated that Mary Blair was the type of woman who could have gone shopping at the Salvation Army, but with her way of carrying herself and styling her outfit, she would have made the ensemble look like it had come from Saks Fifth Avenue. Blair was known for her designer clothes and perfume. Her niece recalled how Mary Blair wore capes! (and she didn't know anyone else, then or now, who wore capes).
While Blair is known for her design sense and color selection, in fact she had poor eyesight. Perhaps this shaped her design and artistic senses as well. Both women recalled Blair's habit of wearing several pairs of eyeglasses, each with a different colored frame, stacked on top of her nose. Blair even had a special pair of glasses where each lens could be flipped up independently so she would see though one lens while she applied her eye make-up to the eye with the flipped up lens.
Mary Blair was good at poker. She loved horses and took her nieces to the race track at Santa Anita. Once she bought Maggie's sister a toy doll at the track, which the girl named "Anita" after the race track: a story that did not sit well with the teacher at show and tell.
Alice urged Maggie to share the story of "the Christmas presents." Every year, Maggie's family would wonder if "Aunt Mary" would ever give them a toy or other traditional present instead of "another painting." And the children always wondered why Blair signed each work... they all knew the picture was from Aunt Mary. Of course now these paintings are treasured family heirlooms, but not quite so impressive at the time to young children.
Blair's research trip to South America with other Disney artists is created with an explosion of color and design in Blair's work. Both women witnessed this in both Blair's artwork, and her personal dress and home decor.

Blair understood the impact of color and design while working on "It's a Small World." Alice did much of the research for that project, and had to temper some of Blair's color choices as there were cases when the color that Blair wanted to use could have possibly offended the culture of the country (such as orange instead of brown bearskin hats for the guards at Buckingham Palace). Here is Alice Davis with one of the costumed dolls she researched:

Blair was humble... but she was valued by Disney, and she herself knew she was good. She was the only Disney artist allowed to sign her own work, and she signed everything. She was aware of national design styles such as the way the artists from certain countries were known for using shapes and colors. Perhaps animation is the true American national art form. Mary Blair's concept art brought a new dimension to the art of Disney and Disneyland that Walt Disney himself counted on Blair to contribute: a sense of whimsy.

Here's link to You Tube clip of vintage Disney documentary with Walt Disney & Mary Blair:
http://www.youtube.com/watch?v=POKSAv0-MYY&feature=related
After each panel, film clips were shown to illustrate Blair's work and influence. This included scenes from Saludos Amigos, The Three Cabelleros, Melody Time, Cinderella, Alice in Wonderland and the short films Susie the Little Blue Coupe and The Little House. On display in the lobby were several samples of Mary Blair original concept art pieces on exhibit just for the panel direct from the Disney animation library. Photos were NOT allowed, but this picture from Google images will give you a feel for what was there...